Between 30,000 and 35,000 people attended last week’s National Red Power Roundup in Albert Lea in what organizers are calling a gathering that is going to be hard to beat. 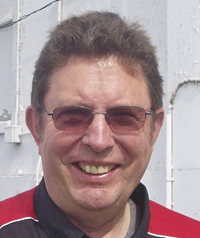 Bruce Jensen, president of the Minnesota chapter of the International Harvester Collectors Club, which organized the event, said there were people in attendance from across the country including the states of Rhode Island, Connecticut, Massachusetts, Texas, California and Washington, among others. There were also attendants from New Zealand, Denmark and Canada.

“The national board told me that this Roundup is going to be hard to beat because of the variety we had,” he said. “We had appliances, trucks, Scouts, just about any tractor they wanted to look at.”

The only disappointment was that there were no combines, he said, but noted those are difficult to haul.

The three-day event was at the Freeborn County Fairgrounds from June 23 through 25, but people started arriving in town a few days prior.

Signs could be seen at multiple businesses around town that welcomed the visitors to the community. Some businesses even offered special discounts for Red Power Roundup participants.

“Most of the people, exhibitors and visitors, said Albert Lea put their right foot forward and really welcomed the people,” Jensen said.

With the increase of people in the community, restaurants were busy and hotels were full.

“Even the parts stores, they noticed a spike in income and traffic,” Jensen said.

Albert Lea Convention and Visitors Bureau Director Susie Petersen is estimating almost $600,000 was spent in the Albert Lea community alone through hotel stays, meals, snacks and gasoline. That is using estimates that the visitors stayed four nights in a hotel averaging out to be $100 a night. There are 588 rooms in Albert Lea.

These figures don’t include costs in neighboring cities, including Austin or Mason City, Iowa, where other participants had to stay once hotels were full.

Petersen said she has heard great reports from many area businesses about increased sales, including Reinertson’s Embroidery, which had its best show to date. The Dairy Barn at the Freeborn County Fairgrounds also reportedly had its best day ever in its history on the Friday of the event.

This was the 22nd National Red Power Roundup.