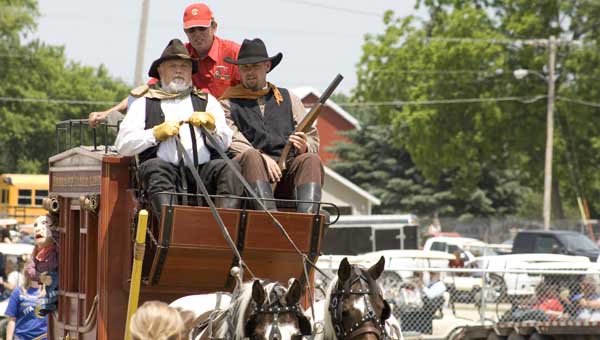 Bruce Jensen, president of the Minnesota chapter of the International Harvester Collectors Club, rides atop the Red Power Express Friday at the start of a parade at the National Red Power Roundup at the Freeborn County Fairgrounds. -- Sarah Stultz/Albert Lea Tribune

More than 100 tractors and other pieces of farm equipment participated in a parade Friday in front of the Freeborn County Fair Grandstand during what was the second day of the National Red Power Roundup.

The event began with a few words from Red Power Roundup organizer Bruce Jensen, the president of the Minnesota chapter of the International Harvester Collectors Club.

By that time, the crowds were thick and Jensen estimated that at the height of the day there would be 20,000 people in attendance. Spectators were asked to sit in the Freeborn County Fair Grandstand to see the parade. This was almost full.

“This is very, very overwhelming for me right now,” Jensen said of all the people. “I never expected this.”

After thanking people for coming out to the weekend event, Jensen ultimately climbed on top of the special Red Power Express, an old-fashioned stagecoach led by two horses. A puppet, operated by a passenger below, waved at the crowds.

After the stagecoach went through, the tractors just kept coming.

Linda Klein, merchandise manager for Chapter 15 of the International Harvester Collectors Club, said there were at least 130 participating tractors and other International pieces of equipment.

Each piece of equipment drove through one at a time, as an announcer took a minute to describe each.

Bob Gunn, of Tipton, Tenn., called the show a “nice” one.

He came to Albert Lea with four other campers and was staying overnight out at the KOA campgrounds east of the city. He was on his way to South Dakota to see Mt. Rushmore.

He said he’s been an International Harvesters collector for about 15 years.

“The most enjoyable part is just seeing the different tractors,” Gunn said. “I also have gotten to see some old friends, people I hadn’t seen in a while.”

“They said this town is the best they’ve been,” Petersen said of how welcoming the community has been to the visitors.

On Friday, vendors could be seen with long lines, and parking lots at hotels and restaurants in the community were full around town with all the people.

Hotels were stated to be booked all throughout town, with people staying in hotels in surrounding communities such as Mason City, Iowa, Faribault, Owatonna and Austin as well.

Events continued Saturday in what was the last day of the event.

Organizers hoped to see more than 2,000 tractors at the fairgrounds over the weekend.

This was the 22nd annual Red Power Roundup.