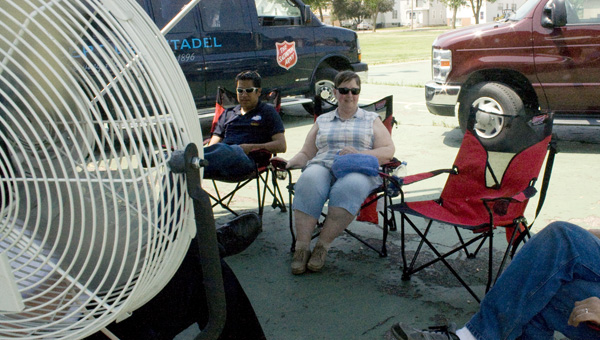 In an attempt to combat the heat, the Albert Lea Salvation Army’s emergency disaster teams on Tuesday opened two cooling stations in the central part of town.

With heat indexes exceeding the 100-degree mark for the second day, the disaster services personnel said they felt compelled to offer this service to the community.

At the two stations — at Morin Park and behind the Salvation Army headquarters — people could get cold water and sit in front of a misting fan under a canopy.

The mobile cooling trailer could also be set up to help someone who is sick or in the case that a command center would need to be set up during a disaster.

This was the first time the trailer was able to be used since it was purchased.

“These cooling centers will give our disaster workers an opportunity to put in use this trailer and complete necessary training for our members,” said Capt. Jim Brickson. “But this is ultimately really about our community and keeping them safe and cool.”

By about 2 p.m., Salvation Army leaders said about a dozen people had stopped by to utilize the service at Morin Park.

Stan Scheib with the Salvation Army said some of the people who came out stopped by simply because they were curious about what was going on, but then they went and told others who in turn came as well.

The service came as a welcome surprise to some who were out in the high temperatures.

Scheib and Brickson said if the cooling stations need to be utilized again in the future they are looking at ways to better publicize the service.