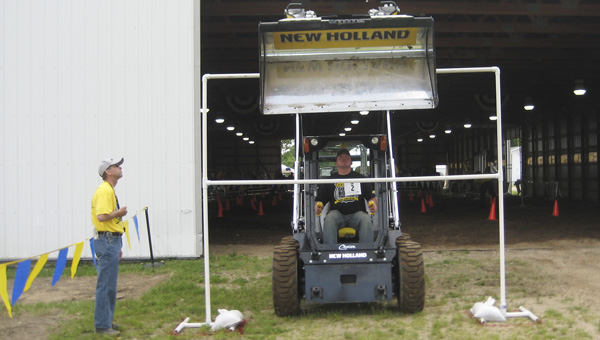 Isaac Hovey completes the final task in the obstacle course by emptying by the dump bucket on the New Holland skid loader. -- Jill Jensen/Albert Lea Tribune

Richard Stadheim would be $250 and a belt buckle richer if it were not for a cone.

The time penalty for his mistake on the skid steer obstacle course bumped him down to fifth place, at 2 minutes and 13 seconds, instead of second. 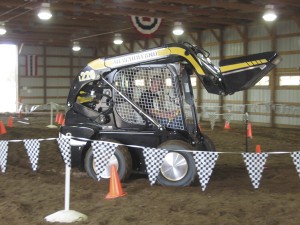 Contestants operated the skid steer loader provided by Titan Machinery through an obstacle course for a chance to win a belt buckle and prize money.

“It was fun,” Stadheim, who has been operating skid loaders for more than 40 years, said. “It was a challenge.”

More than 125 people came out to the Freeborn County Fairgrounds Saturday to watch and compete in an event promoting New Holland’s new line of skid loaders. The main affair was the skid steer obstacle course, said David Garbisch, the store manager of Titan Machinery, which hosted the event.

He said 24 operators older than 18 took on the challenge of maneuvering the obstacle course in the new skid loader for the chance to win one of three prizes.

Contestants had to maneuver a bucket with a pole attached through different post heights, change out the bucket attachment, complete turns and backing up and dump the bucket over the crossbar at the finish line.

Skid loaders can be used for “everything,” Garbisch said. With various attachments, it can move dirt and hay bales, load palettes and dig holes, among others.

Larry Gergen, 61, was the first to operate the 200 Series skid loader on Saturday morning. He said it was “different than what he is used to” in his more than 30 years of farming.

“It’s kind of unique in the way it’s built,” Garbisch said. “Skid steer loaders by nature tend to be kind of a rough-riding machine.”

He said New Holland’s skid loader provides a smoother ride for the operator and the dump bucket reaches farther due to its vertical lift.

Titan Machinery, which has been in Albert Lea for less than two years, was one of 35 dealerships in North America chosen to host an event on New Holland’s Super Boom Road Show because of the market size and its growth potential, Garbisch said.

Those who came out were served pop, doughnuts and Piggy Blues BBQ. Titan Machinery also brought out small tractors and skid steers for display and an outdoor inflatable in the shape of a tractor.

The Red Cross was asked to come, too. Imogene Opdahl, the director of the Red Cross chapter for Freeborn County, said the organization sold first-aid kits and solicited donations for disaster relief during the five-hour event.

The first-place winner received $500 and a belt buckle and will compete in the grand championship event in October to win the New Holland skid steer, a leather jacket and $5,000.