During World War I and World War II, Americans turned to print media and radio clips to learn about the war. As technology improved wartime news moved to the Internet and has now dug its trench into social media.

Dr. Thomas Coffman, medical director of the British Clinic Health System in Albert Lea, has garnered more experience in this field than many others. 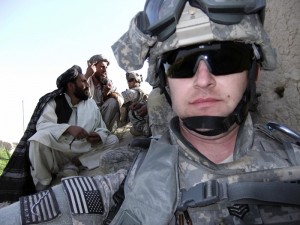 To his fellow members of the armed forces he is known as Naval Petty Officer 1st Class Coffman. Coffman just returned from Kandahar, Afghanistan, on May 10, 2011, after serving as a mass communication specialist for Operation Enduring Freedom.

Coffman served multiple functions while in active duty. He was the social media specialist for southern Afghanistan, populating the Facebook account, Twitter page and YouTube account for the International Security Assistance Force South, which is an international force led by NATO but also composed of others.

“I basically took over social media and it’s kind of new to the military as an information source,” Coffman said. “Over that year, social media became a valuable tool in that region.”

Social media has become a large part of the military with the escalations of middle eastern countries including Tunisia, Egypt and Bahrain. American-backed rebel forces in these areas have used social media as a way to communicate without government interference.

“Their broadcasting where the governments can’t control them anymore,” Coffman, who served under a British two-star general for his first six months, said. “They can’t control the press. If they kick the press out everybody on the ground with a digital camera can broadcast live.”

After his British counterpart in the production office departed Afghanistan, the petty officer 1st class took over photography duties. Allowing Coffman to get out into the field and capture more than 14,000 images for NATO.

His gear included his body armor, an M4 carbine, a 9mm sidearm, his own cameras including a Nikon D300 and a 12-megapixel Fuji digital camera as a backup.

“After 23 years in the military you’re going to have your own gear because it is your reputation of what comes out of that camera,” Coffman said.

Coffman’s camera was concealed under a covering so that it was hidden from enemy forces. A camera in a war zone can draw fire.

“The Taliban and Al Qaeda have three targets: medics, chaplains and photographers,” Coffman said. “If we started getting shot at the camera would go down, you shoot the gun first and then shoot pictures when it’s safe. It is very dangerous to be a journalist in Afghanistan.”

“I was out in town one day with the Australian general taking a tour of the city about a week after Pastor Terry from Florida burned the Quran,” Coffman said. “While we were out in the city they started burning tires and decided they were going to have a riot. Some two dozen people got killed.”

He recalls feeling safe when his unit was around children because he said they wouldn’t be playing near any improvised explosive devices.

“Initially the kids were a little standoffish but as time went on the kids liked the camera,” he said. “We would give them bubble gum.”

A 13-year active duty member of the Navy, Coffman served on a submarine from 1987 to 2000, before entering the reserves. His latest venture marks the fifth time he has been called to active duty. The trip also served as his longest tour.

During the deployment, he made makeshift calendars on the backs of old folders marking the events as they happened. They calendars worked as Coffman’s daily journal. The months are covered in red R’s. These markings distinguished which days his unit was attacked with rockets by the Taliban. In his first month they were attacked 11 times. He was attacked 96 times during his entire deployment.

Coffman received six new awards during his tour including the Army Accommodation Medal, his highest honor to this point in his career.

His last story published before his departure titled “Operation Spartan Strike: Combat Air Assault” was the most read story for three or four days.