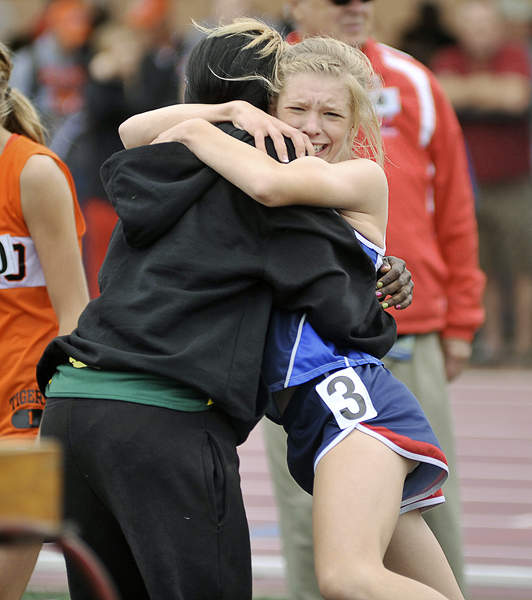 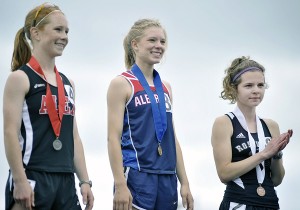 Monson took the lead with 200 meters left but lost it on the final turn. With about 50 meters to go, Monson regained the lead and won by .22 seconds.

“I wanted this so bad,” Monson said. “Today my coaches had a long talk with me and told me to bear down, stick with the plan and you’ll get it. It just feels so amazing right now.”

Only a sophomore, Monson has created an impressive resume as a runner. The state championship completes it.

Monson is a three-time Big Nine Conference champion in cross country and the 1,600- and 3,200-meter runs. She has competed in state a total of nine times in those three events. Now, she finally won it. 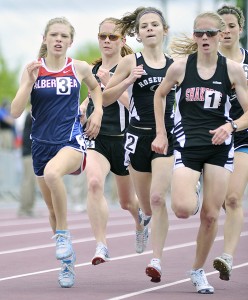 Crissy Monson, left, makes her move to the front on the back stretch of the final lap during the girls’ 1600-meter run. final Saturday at the Minnesota State Track and Field Meet at Hamline University in St. Paul. -- Eric Johnson/Albert Lea Tribune

“I knew every girl out there had the ability for a great kick,” Monson said. “I just hoped mine was better. I was focused on what I was doing.”

Monson’s state championship is even more remarkable because she missed half of the fall cross country season with stress fractures in both her knees. She was able to return and advance to the state meet but finished a disappointing 41st.

Monson said she only began running cross country and track to get in shape for the basketball season.

“I realized I’m not bad so I kept doing it,” she said. “You give up a lot of time with friends and give up sweets, but it’s all worth it because I’m having a really good time right now.”