Sylvia Bernice Kuns, of Clear Lake, Iowa, died Friday, June 24, 2011, at Oakwood Care Center, Clear Lake, Iowa, Funeral services will be 2 p.m. Thursday at the Evangelical Free Church, Clear Lake, Iowa, with the Rev. Dan Long and the Rev. Kent Wagner officiating. Visitation will be from 4 to 7 p.m. Wednesday at Ward-Van Slyke Colonial Chapel, 101 N. 4th St., and then one hour before the service on Thursday. Interment will be at Memorial Park Cemetery, Mason City, Iowa. Family suggests memorials to Evangelical Free Church Building Project in memory of Sylvia and Paul Kuns. 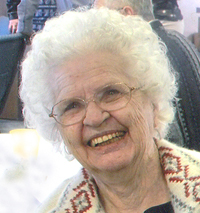 Sylvia was born July 8, 1915, in Williams, Iowa, the daughter of Ben and Julia (Peterson) Hall. She had five brothers and a sister. At the age of 16 she graduated from Forest City High School where she was both class president and valedictorian. She received a one-year scholarship to Waldorf College. Sylvia met Paul Kuns at a Baptist youth gathering and they married on June 21, 1934. After farming in Winnebago County for many years, they moved to a dairy farm near Albert Lea with their five children and several foster children. After retirement they eventually settled in Clear Lake. Here, they joined the Evangelical Free Church where they sang in the choir and taught Sunday school classes. Sylvia started a “Charm School” for young girls from the Sunday school, teaching social skills, including good manners and poise. Later, she served as the church secretary for several years.