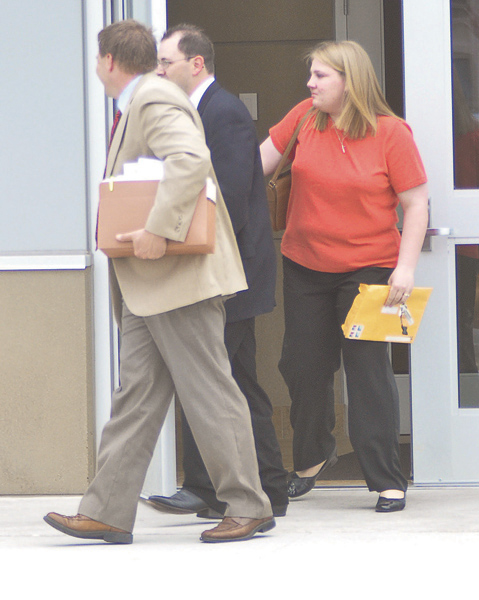 Charity and Brian Miller walk out of the courthouse with their lawyer after day one of their parental rights termination trial Tuesday. -- Amanda Lillie/Albert Lea Tribune

AUSTIN — A Mower County sheriff’s detective testified Wednesday that the chain used to confine Brian and Charity Miller’s 5-year-old son was so taut it restricted the boy from rolling over in his crib.

“His leg was basically right tight on the bars (of the crib) and the chain. He would have to do the splits to get his other foot off the bed,” detective Steven Sandvik told the court.

Sandvik took the witness stand for the majority of the day Wednesday in what was the second day of the Millers’ termination of parental rights trial.

Charity Miller, 26, and Brian Miller, 33, pleaded guilty to false imprisonment and malicious punishment of a child on May 12 on the criminal side of the case.

Sandvik, dressed in a black suit and not his usual button-up shirt and slacks, provided detailed testimony for several hours of the day, including a demonstration of how the chain was reportedly used on the child.

Sandvik showed the court the actual chain the Millers used to anchor their 5-year-old son to his crib. The steel chain is about 18 inches long with 17 total links. He demonstrated how the parents described using it and showed that the boy had two inches slack at most.

The detective’s testimony contradicted what Charity said about the chain Tuesday while she was on the stand. She testified that when the boy was chained he had enough slack to sit on the edge of his bed.

Sandvik and one other witness spoke of the stench coming from the 5-year-old boy’s bedroom on April 21, the day the Millers were arrested.

“(There was a) real strong urine smell,” Gayle Loverink of Mower County Human Services said. “It kind of hit you when you walked in the bedroom.”

“My eyes started watering; my nose started running,” Sandvik said. “It was close to the scent you get when you get too close to anhydrous ammonia. It was overpowering.”

When Sandvik and Loverink first visited the Millers’ home in rural Dexter, the mattress from the 5-year-old boy’s crib was propped against a wall in his bedroom. Sandvik said the particle board where the mattress should lay was stained and swelling from moisture, presumably urine.

That day, Charity told Sandvik and Loverink the mattress was taken off the crib because the boy tears at it and no longer gets to use it. She admitted Tuesday to lying to the detective and said she was “intimidated” by him.

“She said (the boy) doesn’t get to have his mattress anymore because he keeps picking at it,” Sandvik said. “It appeared as if (the boy) had last slept on the board.”

Although neither of the parents showed signs of crying outwardly at Tuesday’s trial, Charity began crying at several points during Wednesday’s testimony.

Charity wiped her eyes with a tissue when the court heard an audio recording of Sandvik’s interview with the 8-year-old boy. The boy said his younger brother gets chained up because “he gets in stuff.” The 8-year-old said he has to stay in his bedroom most of the time when he’s home but hasn’t been chained up in a long time because he doesn’t “get into stuff” anymore. He also mentioned his parents using a fly swatter on his bare bottom for spankings.

“This was a very shocking interview with the child,” Sandvik said. “Literally, his world was his room. There was a ginormous void.”

In their interviews with the detective, both boys talked about being hungry often. Loverink said she took the boys to lunch after the parents were arrested, and the boys took all the jam and creamer from the table because they “might need them later.”

Loverink testified that the children didn’t seem sad the day they were taken away from their parents. The 5-year-old gave Sandvik a high-five as they left the home, she said. When Loverink took the boys out for lunch, they told the hostess and waitress at the restaurant: “Mommy and Daddy are going to jail because it’s not okay to use a chain.”

“They were pretty excited about it,” Loverink said. “It wasn’t a sad exclamation.”

Todd Schoonover, guardian ad litem in the case, said he thinks the Millers’ inappropriate parenting practices will continue if they retain custody of the children.

“I don’t think they get it,” Schoonover testified. “I’ve done this 11 years — I get a feel for people. There seems to be no remorse to me.

“The damage that’s been done mentally, physically, emotionally to the children will take years to repair.”

The Millers will appear in court for a third day of testimony Thursday. The boys’ grandmother is expected to testify, and the defense is expected to call its first witnesses.