The path of the tornado 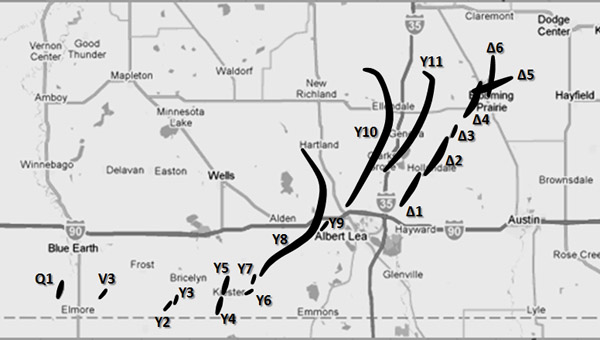 Editor’s note: The National Weather Service has documented the tornadoes of June 17, 2010, on a special page on the Chanhassen bureau’s website. In some places, the bureau uses coordinates for locations, and the Tribune has added named places for readers.

Supercell Y was by far the most prolific tornado-producing supercell of the entire outbreak, in terms of number of tornadoes. This supercell developed near Algona, Iowa, (5:01 p.m.) and tracked to near Owatonna (8:19 p.m.). It was cyclic in nature, meaning that individual circulations developed, matured, and then occluded, with the next area of circulation quickly developing as the old one dissipated. This resulted in numerous tornadoes in close proximity. The first tornado was a weak tornado in far northern Iowa (Winnebago County), in the NWS Des Moines county warning area. The remainder of the tornadoes were in far southern Minnesota, and occurred in Faribault, Freeborn and Steele counties. Those counties are in the NWS Chanhassen area of responsibility.

Tornado Y4 and Tornado Y5 were both EF2 tornadoes in the vicinity of Kiester in Faribault County. Tornado Y4 formed south-southwest of Kiester based on a damage survey, plus photo and video evidence from storm chasers. It began near the intersection of 20th Street and 570th Avenue, then wrapped around another tornado (which developed about one mile west of Kiester) and dissipated. While southwest of Kiester, it did EF2 damage to a couple farmsteads, including tree damage and destruction of several grain bins.

Tornado Y5 developed just west of Kiester, based on a damage survey, plus photo and video evidence from chasers. It struck the northwestern edge of Kiester, producing widespread tree damage and rated EF1 at this point. It continued north as a multiple vortex tornado, doing EF2 damage to a grove of trees. Farther north, several trees and grave stones were knocked over in a cemetery. It then turned and moved north-northeast before dissipating to the northeast of Kiester. 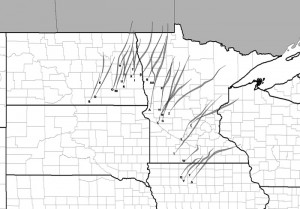 Tracks of supercells on June 17, 2010. -- Map provided by the National Weather Service

Tornado Y8 was a violent, long-tracked, EF4 tornado that impacted Freeborn County in the NWS Chanhassen county warning area. The tornado initially moved northeast to approximately 3.5 miles west of Conger, where at about 43.6156, -93.6015 (Doug Steele place on County Road 17), it began to move more to the east-northeast. West of Armstrong, at about 43.6597, -93.4938 (Gordy Toenges place on County 46), it began tracking nearly due north to just west of Manchester, where at about 43.7357, -93.4801 (1,500 feet west of David Ausen place), it began to move to the north-northwest, before dissipating 1.5 miles west of Hartland. Accounting for the changes in direction of this track, the actual path length covered by the tornado was 19.95 miles.

Near County Roads 17 and 63, the tornado intensified to produce EF3 damage, impacting a farmstead and causing the complete destruction of three swine barns and the loss of 12 head of swine. Two empty grain bins were completely blown away at this location. This location also marked the beginning of crops being completely raked, with only stalks of corn left, and soybean fields being almost unrecognizable.

After passing through this farmstead the tornado took a more easterly path across County Road 63, and maintained EF3 strength. After passing County Road 63, another farmstead was hit, and two empty harvester silos were toppled. The tornado continued to the northeast across County Road 4, where continued raking of the fields was noted with significant deposition of debris along the tornado path. The tornado continued to the north-northeast, grew to 1,000 yards, and around 1750 LST (local solar time) impacted a farmstead along County Road 12 two miles north of Conger, where EF4 damage was observed. The house at this location was completely destroyed, as was the barn and several other buildings. Extensive tree damage was noted with nearly all branches being removed from the trunks. Debarking of trees was widespread at this location. A car was also tumbled a distance of 3,200 feet, coming to rest in a field east of County Road 12.

Tornado Y10 was the fourth strong to violent tornado produced by Supercell Y, and was on the ground for roughly 18.8 miles and 39 minutes. Touchdown was near the intersection of Freeborn County Roads 14 and 20. Multiple farmsteads experienced significant structural and tree damage, including one house completely destroyed and several others heavily damaged. Many outbuildings were destroyed, hundreds of trees uprooted and snapped, with some partially debarked. It then moved into Steele County, southwest of Ellendale, where it began moving to the north-northwest. At about 43.9255, -93.3453 (2 1/4 miles north of Beaver Lake), it began moving toward the northwest, and at about 43.9407, -93.3627 (three miles north of Lonergan Lake), it actually turned some more and moved toward the west-northwest until it finally dissipated. Accounting for the change in direction, the tornado had an actual path length of 7.7 miles in Steele County. Along the way, several homes experienced significant structural damage, with one house completely destroyed and the roof removed from two others. Many outbuildings were destroyed, and hundreds of trees were uprooted and snapped.