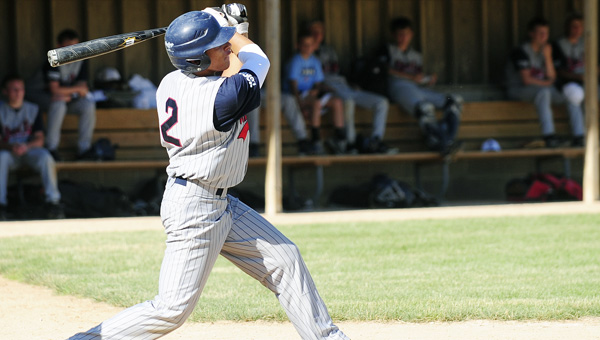 The afternoon’s opening game was a showcase of Albert Lea center fielder Makael Lunning’s power. Lunning lead the way to an 8-5 victory behind his 2-for-4 performance at the plate, recording two home runs and five RBIs.

Scoring began in the top of the first when Spartan lead-off man, Tate Deach, scored from second base on a throwing error by Albert Lea catcher Zach Bordewich. Pitcher Tyler Enderson settled down after the opening two batters reached base and sat the next three batters down in order.

Lunning recorded his first of two home runs during the bottom half of the inning. He sent his first home run outside of the park over the right-field fence, scoring shortstop Ethan Abben. Abben reached base on a walk.

“It’s kind of nice having him play back and forth with the Legion (team) and having him in the lineup with us,” head coach Derek Fleek said. “The kids kind of look up to him and see what he’s doing.”

Derek Berkard tacked on two more RBIs for the Tigers before they exited the inning.

Déja vu struck in the bottom of the second when Lunning sent a towering bomb over top of the 350-foot sign in left-center field. The home run scored Abben and Johnathan Fleek.

Abben added an RBI double to the mix in the fourth frame. He scored teammate Lucas Hanson on the play.

Enderson tossed a complete seven innings allowing just four earned runs on eight hits. Enderson got into a pickle late in the game. With the Spartans on the corners, Enderson allowed back to back hits. Rochester-Mayo was able to pull within three runs during the sequence, before Enderson regrouped and was able to record the final outs.

“Tyler is one of the main pitchers we throw all of the time, confidence-wise he gets a little nervous sometimes so we have to get him to relax and settle down,” Fleek said. “He’s a good pitcher with good control.”