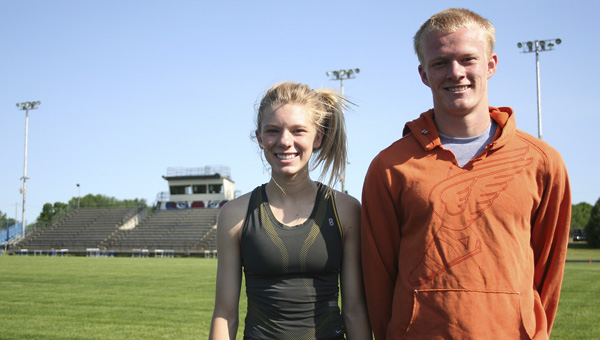 Chrissy Monson admits the competition at the girls’ state track and field meet has intimidated her in the past. But in her third consecutive trip to St. Paul, the sophomore no longer considers herself an underdog.

Monson races in the 3,200- and 1,600-meter races on Friday and Saturday, respectively, in the state meet at Hamline University in St. Paul. There she placed third last season in the 3,200 and sixth in the 1,600, but this year she has her eye on gold.

“I have much more confidence,” Monson said. “I know I can run with those girls and stay with them.”

Monson said she has a “legitimate” shot at winning a state championship in either race. She has the second fastest 1,600-meter time in the state this season and is seeded third after finishing the race in 5 minutes and 11.02 seconds in the Section 1AA meet. Her goal on Saturday is to break five minutes.

“I really want to beat my time from last year,” Monson said. “I am going out there to win so we’ll just see what happens.”

Monson is seeded fifth in the 3,200-meter run and hopes to drop over 13 seconds off her 11:13.07 seed time. Monson said she wasn’t happy with her seed times in either race, though both times were affected by hot or windy weather.

Monson said she is an improved runner this season because her form is looser and more relaxed. She said she’s worked hard on strengthening her core and is also more experienced — things she thinks will give her an edge once the race begins.

“Once the gun goes off, rankings and seeds don’t matter anymore,” Monson said. “Who’s best on that day is going to pull out ahead.”

The biggest difference for Monson between the state meet and regular season will be the competition of the races. After winning every race handily thus far, Monson will need to become more physical at state.

“I need to run big,” she said. “I’ve done fine with it before. I need to keep from getting boxed in for the best chance that I can hold my ground and not let others push me around.”

Sunblad advanced to the state boys’ track and field meet after placing second in the 300-meter intermediate hurdles at the Section 1AA meet.

Sunblad ran a personal best in the section’s preliminaries but said he struggled in the finals.

“I actually ran pretty poorly,” he said. “But my time was fast enough.”

Sunblad said he stuttered on three hurdles and led with the wrong leg over four. Still, he finished second and earned his first trip to state.

“I didn’t know how close I would be but I knew I was definitely in the top three,” Sunblad said. “If I edged them out, I could make it.”

Sunblad’s goal is to advance to the state finals. He said he’ll likely have to finish the race in under 40 seconds, and during practice this week, he’s been running around 39 seconds.

“I can probably make the finals,” Sunblad said. “It will be close, though.”

Sunblad said he’s “extremely excited to get the opportunity to run against the best in the state.” He said he’s going to go out and run his best.