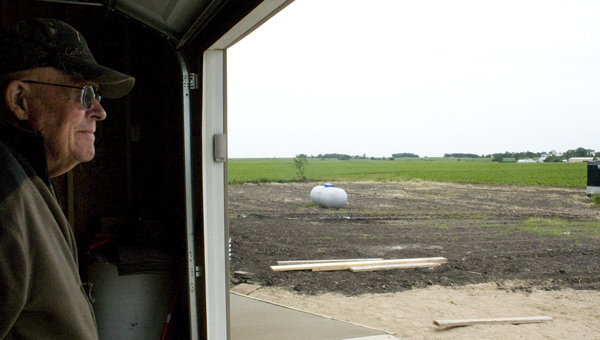 Ron Woodside looks over his property recently, looking south out of his new garage. Much of the landscape still is changed a year after tornadoes ravaged the area near Alden. -- Sarah Stultz/Albert Lea Tribune

Not a day goes by that tornado survivor Ron Woodside doesn’t think about what has happened.

A year ago almost to the day, Ron and his wife, Kathy, 67, were swept out of their home in the middle of an EF4 tornado northwest of Armstrong. 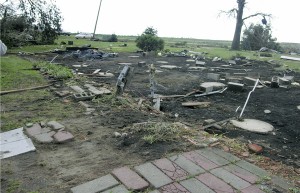 Other than a few pieces of the steel frame that were thrown as far as 200 or 300 yards away, this was all that remained of the home of Ron and Kathy Woodside, west of Armstrong. -- Sarah Stultz/Albert Lea Tribune

As their belongings were destroyed around them, they were carried to the north ditch across the gravel road in front of their home, where they were found next to each other by responders.

Ron, who suffered from 27 broken bones and was in and out of consciousness for days after the incident, survived. Kathy, however, died on the way to the hospital.

“Every day I have sad times,” said Ron, as he talked about Kathy’s happy attitude and smile. “We got along super well and had a real good life. It’s tough when she’s not here.”

Though he is pleased with his new one-level prefabricated house — built on the same property as his former home — there are still many reminders of things that will never be the same as they once were.

Buildings are gone; trees were destroyed; and the only evidence that remains of his life with Kathy are in a few photographs salvaged by friends and family after the tornado.

The rest is just a memory.

Despite the sorrow he has felt during the last year, however, Ron said he has come to terms with what has taken place. 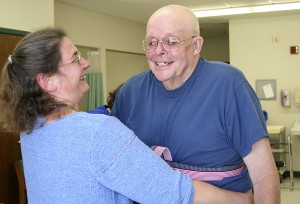 Ron Woodside, right, smiles after achieving a small victory of standing up on one leg, assisted by physical therapist Ann Harveaux, in the transitional care unit of Good Samaritan Society of Albert Lea earlier this year. Woodside was recovering from injuries he sustained the night of June 17 when a tornado destroyed his home. -- Sarah Stultz/Albert Lea Tribune

Over the last year, he — like dozens of other victims of the June 17, 2010, tornadoes — have had to endure a series of emotions.

Though the hurt and memories of that day live on, many residents have shown a resiliency, an ability to spring back from adversity.

“With support, with permission to talk about what we need to talk about, we’re very resilient people,” said Rose Olmsted, coordinator of the Freeborn County Crisis Response Team. “I think overall, people would see there’s a great deal of resiliency and pride in the community.”

Ron said he made the decision to take control of his life a short time after he regained consciousness while at St. Marys Hospital in Rochester.

It was there he found out about Kathy’s death.

“At the time my daughter told me about it, it sunk in, but right away I thought, I can’t dwell on this. I have to get well,” Ron said.

In the months that followed, doctors deemed Ron a miracle, someone who inspired others around him.

He had 19 broken ribs, broken collarbones and shoulder blades, a dislocated elbow and rotator cuff damage in one arm. One leg also had nerve and tendon damage. He was put on a ventilator for a while and had a tracheotomy, and ultimately he was released from the hospital after only five weeks to move into rehabilitation.

In the transitional care unit of Good Samaritan Society of Albert Lea, Ron continued to inspire. With his go-getter attitude, he re-learned how to stand, walk and move his other limbs and was released with just a cane to help him get around. He walks on his own today.

“I made up my mind this was not something to be bitter about,” he said. “I’ve made my peace with God.”

Olmsted said while there is an overall sense of resiliency in the community, there are many who are still suffering from the effects of trauma one year after the tornadoes.

In fact, she said, the one-year anniversary of an event in itself, in addition to the recent tornadoes in Minneapolis and Missouri, can trigger tough experiences.

She’s heard about struggles with finances and insurance companies and about people feeling overwhelmed with all they’ve had to take care of. Others have had problems recognizing that some of their losses were just material things and that these items weren’t meaningful in the long run.

Olmsted said she’s also heard people talk about how the tornadoes caused them to shift their priorities and focus on being together with family and friends.

In other areas, survivor guilt is present for some who feel guilty that their losses weren’t as bad as others.

There have been children who have questioned their parents any time they see news coverage of tornadoes. The children wonder if tornadoes are going to strike down in Freeborn County again.

Even the sight of ambulances, law enforcement and fire trucks can sometimes trigger past traumatic experiences, Olmsted said.

These are all normal reactions, she assured.

She encouraged community members to help those people who might be dealing with these kinds of emotions.

“Still let people talk about it,” she said. “That’s healthy for people to still be able to talk about it. People still need to be heard. The value is in listening to them.” 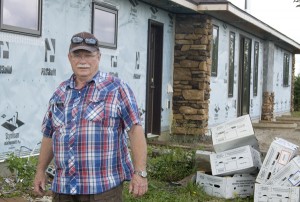 Manchester resident Steve Hoelscher stands in front of his new home at 23683 700th Ave. that was built after a tornado badly damaged his former home, machine shed and other structures on an adjoining family property on June 17, 2010. -- Sarah Stultz/Albert Lea Tribune

Since a tornado destroyed his home and family farm at 23683 and 23657 700th Ave., Manchester resident Steve Hoelscher has not missed a single day coming out to his property to check up and clean up.

In just a few weeks, he said the preparations on his new home will be completed and he will be able to move in.

“The hardest thing to look at is the trees,” he said. “They were over 100 years old. Buildings, houses can be replaced. The part that hurts most is the trees.”

After a tornado destroyed many of his possessions, he said he felt hopeless and overwhelmed with how to proceed.

A lot of people just showed up, carrying branches away and cleaning up.

He doesn’t know what he would have done without them. 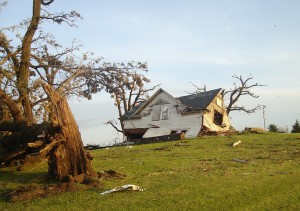 The family farmhouse of Steve Hoelscher, at 23657 700th Ave., was destroyed June 17, 2010, after a tornado swept through. The house was originally built in 1939 for his grandparents for their retirement. -- Submitted photo

Though he has made a lot of progress during the last year, he said once he settles with his insurance company on his personal property possessions, he thinks he will finally be able to start going on with his life.

“It’s just amazing how a couple seconds of time can take your life and totally turn it upside down,” Hoelscher said.

He plans to stand outside looking south at 20 minutes to 7 p.m. on Friday and just reflect on the last year.

“I haven’t shed a tear yet, but there’s days now where it’s coming close to happening,” Hoelscher said.

Angie Eggum, whose home at 69842 230th St. was completely destroyed the night of the tornadoes, now lives in a home a mile and a half west of Clarks Grove with her husband and two children.

“Our family is doing very well,” she said. “I think it brought us closer together. We always did enjoy spending time together, but they like to be home more now than they used to.”

“Having switched schools and switched houses and having had a lot of changes in their lives, I think for the most part they’re doing well,” she said.

She noted that her children have developed a new respect for storms; in fact, Maggie has even learned to read the Doppler radar.

“Rather than be afraid, I think they are more respectful,” she said.

But there are still certain things that trigger some of the traumatic feelings of that night all over again.

For Maggie, who was home that night with her father, Karl, in the basement, it’s heavy wind.

Olmsted said this is normal.

“We’re still very appreciative to the community,” Eggum said. “It’s nice to see the community hasn’t forgotten. It’s been a whole year and people are still checking up on us.”

Jerry Rasmusson, a member of the Crisis Response Team, who has had the opportunity to help many tornado victims, said he has been amazed at the stories he’s heard in the aftermath of neighbors helping neighbors. He said at West Freeborn Lutheran Church in the days after the tornadoes, there were between 70 and 100 volunteers every day. People brought food for the volunteers for several days.

“That’s something that impacted me,” Rasmusson said.

When asked how the tornadoes have affected him, Rasmusson responded:

“The resiliency of those people is what I think about a lot. About how they can go through something like this, and the human spirit just naturally in most cases keeps going on.”

It’s that spirit that has people like Ron, who moved into his new home — with a basement — in November, moving forward.

“I’m not afraid of a tornado,” he said, noting that he thinks statistics say he has a one in a million chance of getting hit a second time by a tornado.