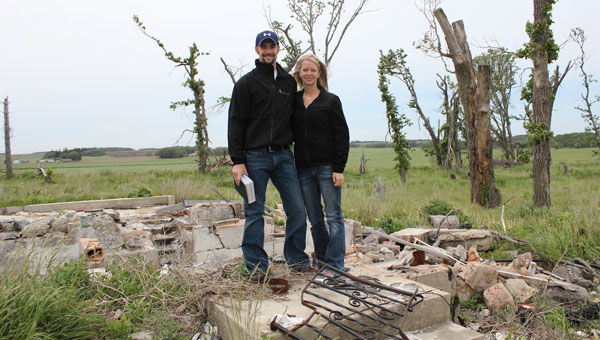 Jeremiah and Lindsey Mickelson stand on steps that used to lead into their home. They’re still working on cleaning up the property a year later. -- Kelli Lageson/Albert Lea Tribune

Kevin Marshall was sitting outside his home eating peanuts and enjoying a cold beverage after just having finished mowing his lawn on June 17, 2010. Marshall said he was fascinated watching the storm clouds move in, but he knew he needed to take cover when he saw his neighbor’s trees being ripped out of the ground. 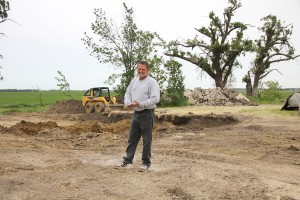 Kevin Marshall stands at the spot where his front door used to be. Behind him used to be a large tree grove. He and his family have moved to Albert Lea, but still plan to own the land near Alden for the time being. -- Kelli Lageson/Albert Lea Tribune

“I thought ‘That damn thing is coming toward us,’” Marshall said.

Marshall and his family were in the basement of their home, at 20582 680th Ave. southeast of Alden, when the storm ripped the roof off their home and sent many of their belongings flying. Marshall said his first emotion was anger while looking at the buildings he lost and the wreckage in the area.

One year later, Marshall said the most important thing he learned was how wonderful people are and how much they’re willing to help when needed.

“You couldn’t chase me out of this area,” Marshall said.

Though he’s thankful for all the help he got from neighbors and the community of Alden, he can’t justify rebuilding on his land.

He originally thought he might rebuild, but financially it made better sense for him to buy an existing home outright instead of building a new home on his property, which he would have had to take a mortgage out to do.

“I feel bad about not relocating here,” Marshall said. 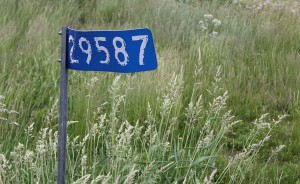 This beat up sign is one of the only clues to be seen from the road that a house used to stand at this address. All that's left currently is a basement, and the house, a garage, and other buildings were flattened by a tornado on June 17, 2010. -- Kelli Lageson/Albert Lea Tribune

Many of his neighbors have rebuilt homes on their property already, and Marshall said he doesn’t want to make it seem like he’s running away from the area. He still owns the land, and building a house there might be a possibility someday. He doesn’t feel a lot of attachment to the land because it’s not family land, and he’s only been there 11 years.

Marshall’s neighbors, Bob and Laural Hanson, of 20858 680th Ave., are also not planning on rebuilding in the near future. Because Bob owns Rightway Roofing he needed a building immediately to keep working. The building he worked in, as well as other buildings on his land were all flattened. Their home was twisted off its foundation, so the family stayed with other friends and family until they found a temporary home.

Emergency responders told Laural that if she and Bob had been home during the tornado they probably wouldn’t have lived through it. Their basement was filled with debris after the home came completely apart from its foundation.

Laural said it has been a busy year, and she said she and Bob are thankful for their friends and family. She said they received support from many people in many different ways, which helped because she was so busy working, helping with cleanup and looking for a new place to live.

“I looked at houses every day I had off,” Laural said.

While house shopping, the Hansons rented a home from friends until August. Laural said their friends and family helped with so many unexpected things like bringing furniture and food to the rental home.

“Really, we were so busy I never felt homeless,” Laural said.

Laural and Bob recently purchased a home at 71338 County Road 17 east of Conger. Laural said it had a shop for Bob’s business. They’re keeping the farm out by Alden and have built a barn on the property.

“We didn’t want anything to change,” Laural said.

She said as they make memories in their new home it will start to feel like their home. Because Bob is so busy with his business and there are certain inspections and permits needed, they haven’t yet torn down the damaged home near Alden. The plan is to tear it down this Friday, on the one-year anniversary of the tornado.

Laural doesn’t think she’ll ever want to rebuild on the land because of the lack of trees, but one year doesn’t feel like that long to her and she doesn’t know how she’ll feel in the future.

“I really don’t want to, but time will tell,” Laural said. “Maybe our kids could build out there.”

Laural said they definitely thought about rebuilding but worried that they would rebuild and it still wouldn’t feel like home because of how the landscape has changed. Her daughter, Jasmine, agreed.

“Living without trees would be weird,” Jasmine said.

No longer having trees is what’s keeping Jeremiah and Lindsey Mickelson from rebuilding on their land northwest of Clarks Grove at 29587 762nd Ave. 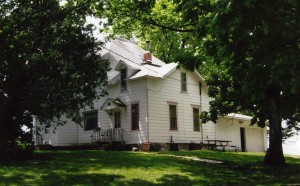 The home used to stand on a hill surrounded by a grove of large oak trees. Jeremiah estimates they lost more than 100 trees, and with that loss they haven’t decided if they’ll rebuild. After the tornado hit they stayed with Jeremiah’s parents in Clarks Grove, and then bought a home in Clarks Grove in September.

The night of the tornado Jeremiah and Lindsey were in the basement when the house was ripped apart above them. Lindsey said she called her mom to tell her she was in the basement and being rained on. They climbed up a pile of wood to get out of the basement, and neighbors were there almost immediately who had been watching the storm. 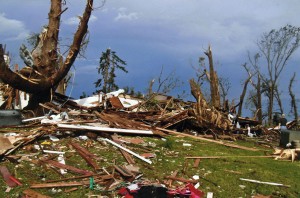 This photo was taken on June 18, 2010, after a tornado hit the Mickelson’s home northwest of Clarks Grove. -- Submitted photo

“The whole summer it took over our life,” Lindsey said. “There were trees on top of everything.”

Jeremiah said he knew the family he bought the house from and spent a lot of time there as a child so he is connected to the land and the area. Even a year later they’re still cleaning up debris.

“We’ve got some work to do yet, but it’ll get there,” Lindsey said.

Marshall and his family still are working at their property near Alden. They’re filling in the hole where the basement used to be and there are still piles of trees. He said he’s still having a hard time believing it happened.

“Everything you had was either bent, broken or drowned,” Marshall said.

Though the last year has had a big impact on Marshall’s life, he said the biggest thing he learned was how good people are at heart. He said often people he didn’t even know would show up to help or to drop off food without accepting payment or expecting anything in return.

“There’s a lot of positives that came out of it — you just gotta look for them,” Marshall said.

The Freeborn County Red Cross and the Salvation Army also helped his family after the tornado, and Marshall said their support was immensely helpful.

“This is a beautiful community we live in; I can’t stress that enough,” Marshall said.