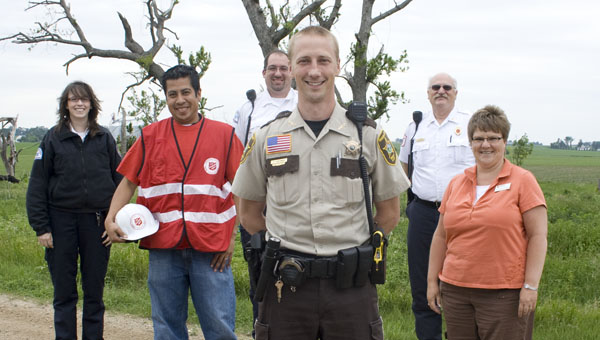 Editor’s note: This is the fourth in a six-part series on the June 17, 2010, tornado outbreak.

On June 17, 2010, Kindler — who was then a detective supervisor — sat at his home watching the western sky.

As he saw a storm system approach the Conger area, he immediately responded.

Within the first hour or so, he picked up another deputy and together the two men tried to maintain traffic.

“I was primarily in charge of Conger, but the image that is most vivid is watching that tornado traverse the county,” he said. “It was such an awesome sight the way it moved. It’s very fortunate we didn’t have more injuries or deaths than what we did.”

After the tornado passed through his area, Kindler and the deputy attempted to listen to the radio traffic to find out where they could be of value. 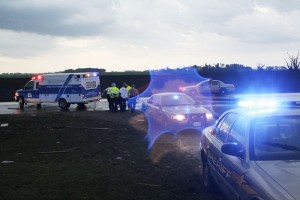 Ambulance personnel and sheriff’s deputies assist Ada Graves to an ambulance June 17, 2010, along Freeborn County Road 46 west of Armstrong. The farmhouse and its outbuildings were a total loss. -- Tim Engstrom/Albert Lea Tribune

“The radio traffic was so chaotic,” he said. “Even within the Sheriff’s Office, we didn’t know who was responding or where they were at.”

Struggling to communicate, he and the deputy decided to start a grid search or systematic review of the area around Conger to make sure no one was trapped. After one house was completed, they’d mark it down to keep track of where they had been.

They were unaware of just how widespread the devastation was miles to the north in Armstrong, Manchester Township, Clarks Grove Township and Hollandale. Little did they know that not one but three tornado-producing storm cells were striking the county.

Now, a year later, reflecting on those experiences, Kindler and many of the other first responders that night agree that the largest lesson they learned that night — when Freeborn County’s entire emergency response crew was called to action — was the importance of good communication.

Freeborn County Emergency Management Director Mark Roche was set up with some sheriff’s deputies right outside of Freeborn County in the Walters area trying to follow the storm and see what was happening.

At one point, Roche said, he saw one tornado split into two funnels. He knew the tornadoes had hit the ground.

Roche said the radio system the Sheriff’s Office had at the time allowed more than one person to talk at the same time, which resulted in interrupted messages and made transmissions difficult to hear. At some other areas there were dead spots. When that happened, the deputies tried to then pull out their cell phones, but the cellular communications system was overloaded so many calls did not go through. 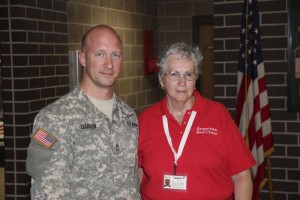 Sgt. First Class Jeff Dahlen and Director of American Red Cross in Albert Lea Imogean Opdahl pose for a photo June 17, 2010 at the National Gaurd Armory. They said the Red Cross is ready for anyone who needs help. “We have over 50 cots,” Opdahl said. “We will take good care of you. We have doctors, nurses and food all set and ready.” -- Scott Schmeltzer/Albert Lea Tribune

Anderson said he saw a tornado coming and then it moved northwest of Clarks Grove.

“What I remember distinctly is watching that tornado and then praying that it was not going to dip to the east and hit Clarks Grove,” he said. “It was probably a quarter mile west of the edge of Clarks Grove.”

After the tornado hit, the firefighters immediately dispatched to check on residents.

They stopped at every farm that had been hit by a tornado in their jurisdiction. Other firefighters in other jurisdictions were doing the same.

Everyone they checked on was OK, though there was a lot of structural damage throughout. He said he thought the response went well.

Stationed in northern Albert Lea near the Hy-Vee grocery store was Kate Arms and her partner, who are both paramedics with Mayo Clinic Health System in Albert Lea.

Arms said she was stationed out in the community that night for safety reasons. In case a tornado were to hit the hospital, all of the emergency crews would not be hit.

She said she was fortunate that night to not have a lot of medical calls but did fill in on some welfare checks for the Albert Lea Police Department.

She mainly stayed within city limits but checked on law enforcement periodically through her radio. 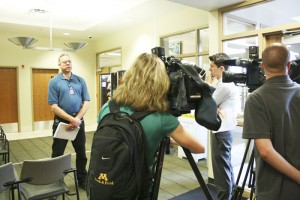 Freeborn County Administrator John Kluever talks to the media on the morning of June 18, 2010, about how many sites were damaged in the county. -- Geri McShane/Albert Lea Tribune

At a few points, there were some problems communicating because of some downed towers, so when that happened, she was able to communicate via cell phone.

Meanwhile, registered nurse Melissa Bertelsen was back at the hospital.

Though it was close to the time to change shifts at 7 p.m., Bertelsen said she was focused on getting patients to the center of the building. She and others warned patients that the tornado watch had upgraded to a tornado warning. Otherwise, things were running smoothly.

A short while later, after the tornadoes had passed, patients with injuries began arriving at the hospital. She estimated 13 or 14 people were brought in.

Because it was a shift change, there were people on the departing shift and the oncoming shift who were able to help with the overload.

Bertelsen said there was a doctor and nurse in every emergency room bay. Some surgeons from Austin even came to help if they were needed. 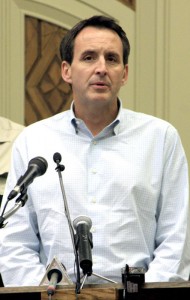 Then-Gov. Tim Pawlenty spoke at the Freeborn County Courthouse on June 18, 2010, about the relief efforts put in place and to say thank you to all those who helped with the disaster. -- Brandi Hagen/Albert Lea Tribune

Brad Niebuhr, emergency department director, who worked as operations chief that night at the hospital, said the response from medical personnel was great to see.

“I think the response from the medical group of practitioners, all levels, was good,” Niebuhr said. “That day was really amazing. Everyone was available and willing to do whatever was needed.”

Workers were either called to come in or some even came in on their own. Some even brought with them their families, which is encouraged by the hospital.

Niebuhr said the experience taught them that the hospital’s disaster plan does work.

“Considering the circumstances, we did pretty well,” Arms added.

Though the officials said they think the response went well overall, there were a few areas where there could have been improvement.

Kindler said the new Allied Radio Matrix for Emergency Response system, aka ARMER, will solve many of the problems the county faced that night with communications.

The system is moving forward and a new tower should be installed soon. After that’s up, antennas and wiring will be installed, and the system should be ready to go by mid-September.

The county has also since devised a system for an emergency operation center.

“By having it at that one location, we can make the decisions on where to go, how to respond,” Kindler said.

This will help with outside agencies as well who wish to come in and assist during a time of a disaster.

Each agency would have a representative inside the operation center and tasks would be distributed from this center.

Freeborn County Administrator John Kluever, who was called upon to be the media spokesman for the county after the tornadoes, said he and many others have completed a series of training and preparation in the aftermath of the storms. 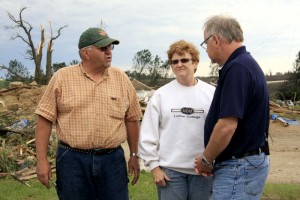 Gordon Toenges and his wife, Kathy, talk with Congressman Tim Walz in June 2010 about what they experienced during the tornado that hit their home. -- Brandi Hagen/Albert Lea Tribune

“I think countywide, whether at the city or county level, we’re at a better perspective to deal with a disaster,” Kluever said. “It was a very difficult weekend and four or five days. I can’t empathize enough with the people who were impacted.”

He said the tornadoes heightened awareness of the importance of proper training. County staff are being trained in a national model, which will also help responders be able to communicate better.

Jeannie Opdahl, director of the Freeborn County chapter of the American Red Cross said she, too, recognized communication as the largest hurdle in responding to the June 2010 tornadoes.

Since that incident, however, local agencies responding to emergencies have met several times at the Freeborn County Government Center to discuss response and how to improve.

“We’ve worked through a lot of those things and figured out what we could have done,” Opdahl said.

She said the June 2010 tornadoes also helped different emergency responding agencies better learn other agencies’ roles. They learned how to work together, make sure there were no duplications and make sure that no one fell through the cracks.

“We worked really hard all last fall and winter to make sure those things got taken care of,” Opdahl noted.

Opdahl and Crisis Response Team Coordinator Rose Olmsted said they also learned that they need more trained volunteers. With a natural disaster such as a tornado, people need to respond immediately.

“There’s no time then for training,” Opdahl said. “It’s training that needs to be done ahead of time.”

Olmsted said even with 51 volunteers on the Crisis Response Team, she could have used more trained volunteers, between people’s work schedules, personal matters and volunteers affected by the tornadoes themselves.

Regardless, she said she and her volunteers had a valuable experience being with the tornado victims in a place where they could tell their stories.

“And to remind them that their reactions are normal to that traumatic event,” she added. “So many people need to hear that.”

Opdahl said she feels officials are better prepared now than they were a year ago.

“It’s the first really large disaster we’ve had for a number of years,” she said. “It’s still fresh in our minds. Our volunteers are still talking about what they did and how it went.”