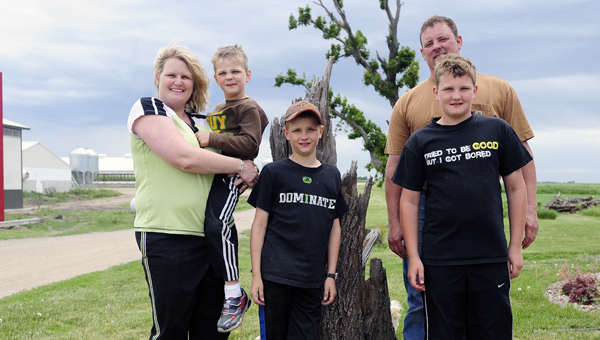 The Steele family stands in front of what’s left of two of their trees after their farm was hit by the June 17 tornado outbreak. Pictured is, from left, Staci, Gavin, Garrick, Doug and Garrison. -- Andrew Dyrdal/Albert Lea Tribune

Editor’s note: This is the second in a six-part series on the June 17, 2010, tornado outbreak.

ALDEN — Doug and Staci Steele didn’t put much thought into what needed to be rebuilt first.

Work is not completed yet on the renovation of Doug and Staci Steele’s home, above, which was severely damaged during the June 17, 2010, tornado outbreak. -- Andrew Dyrdal/Albert Lea Tribune

Within hours after a tornado carved through the Steele’s farm on County Road 17 south of Alden on June 17, 2010, shredding five outbuilding and four grain bins, among others, and severely damaging their home, the family began rebuilding the farm.

“It’s our livelihood,” Doug said. “The house doesn’t make us any money.”

Plus the house was still standing, unlike everything else on the Steele’s property.

It left 2,000 hogs standing on nothing but a slab of pavement and killed 50 more, and it damaged the family’s corn and beans.

The Steele’s feared their house, 63322 180th St., would need to be demolished, but an engineer called it structurally sound. It was hardly spared, though. Rain had soaked the home’s interior after all the windows shattered. Beams had shot through walls and roof, leaving holes, and a vestibule was thrown into the kitchen.

Doug and Staci, along with their three sons, Gavin, Garrick and Garrison, were in the basement went the tornado struck. Everyone but Doug was in the basement when the sky turned pink and black and the electricity went out. Doug headed downstairs once all the trees began leaning south.

The Steele’s two new hog finishing barns, above, were replaced quickly after the two previous ones were destroyed by a tornado. -- Andrew Dyrdal/Albert Lea Tribune

Within minutes the Steeles’ ears began popping and windows shattered. Then, all of a sudden, the family smelled fresh air and they went upstairs.

“The wind was blowing and the sun was shining, and there was tin all over,” Doug said. “We didn’t know what to do.”

Doug said initially the damage didn’t seem devastating. An old barn’s roof was gone and LP tanks were flipped over, letting out the smell of gas. He alertly turned the gas off before noticing the rest of the damage. Doug recalled calling his dad to tell him “You better come out here, we just got hit by the tornado and I think it’s all gone.”

Neighbors began showing up with cattle panels and steel posts to confine the loose hogs, and soon more than 100 friends and family members were on the farm helping clean up for the next three days. They picked metal out of the cornfields and stacked anything there wasn’t room for on pallets. Busted tree limbs were thrown into piles. 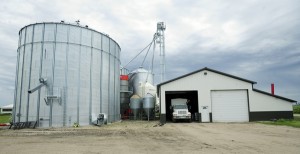 While the Steeles didn’t waste anytime cleaning up, Doug quickly began planning the rebuilding process, too. Within five days, he ordered new buildings, which were installed before the fall harvest. Doug credited a dry fall for making that possible, especially since he didn’t have a corn dryer.

Once the family had time to work on the house, it received new siding and was re-roofed. The interior walls were mudded and taped, and the family room’s drenched carpet was replaced with hardwood floors. There is still plenty of work to be done, though.

Doug estimated the damage to the farm to be over $1,000,000 and said most was covered by insurance.

Doug said the family hasn’t planted new trees but plans on replacing the twisted grove that still sits on the property.

“That’s the worst thing,” Doug said. “It’s going to be 30 years before we can enjoy them.”

The Steeles weren’t the only farm family waste no time in rebuilding. Gordy and Kathy Toenges also sprung into action once their farm and house were destroyed in the tornado’s wake.

The Toenges’ home at 68708 Country Road 46 west of Armstrong was completely removed from its foundation. A hog finishing house, a machine shed, a livestock building and a grain bin were also destroyed, along with the family’s truck. 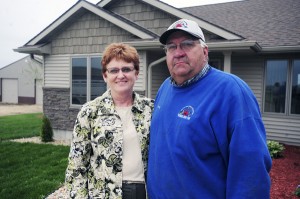 Gordy and Kathy Toenges stand in front of their new home in rural Alden. The couple’s previous home was destroyed by a tornado on June 17, 2010. -- Andrew Dyrdal/Albert Lea Tribune

Gordy and Kathy were covering their heads with Carhartt jackets in the basement of their farmhouse when the tornado struck. The twister passed and they uncovered their heads — all they could see was sky.

“Everything was gone,” Kathy said.

Gordy and Kathy had lived in their modest home for 36 years, and it had been in the family for 80. The night of June 17, after the tornado hit, Gordy asked Kathy if she wanted to move into Alden. She said “no,” and they started rebuilding the same night.

Heavy equipment was at their farm within hours, hauling away what was left of their buildings. The Toengeses hired construction worker Todd Neitzel of New Richland the following day, and he lined up the rest of the contractors. Wangen Excavating had a building permit within a week, and just 53 days after their house was destroyed, a brand new one stood in its place. 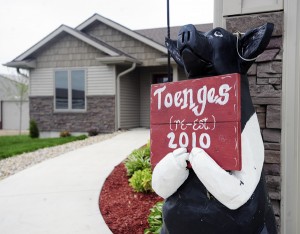 While the new house was being built, Gordy and Kathy lived in a camper at the Freeborn County Fairgrounds, where Gordy is a board member.

“I was living my dream,” Gordy said, “living at the fair.”

Jeff and Beth Zeller rebuilt their farm at 18681 650th Ave. south of Alden, after it was destroyed in the June 17 tornado outbreak.

The Zellers built a ranch-style home, similar to their old one, on the same spot.

“We wanted to get back in the house right away,” Jeff said. “Our livelihood is here, and we knew we were going to have to harvest crop right away.”

Jeff said all the building decisions were made within two weeks and he and Beth moved into their new home on Dec. 23.

Six buildings were destroyed on the Zellers’ farm, including two machine sheds, two cattle sheds and two hog buildings. The family only rebuilt the machine sheds.

Many of the families whose farms were destroyed were able to see a silver lining one year later.

“There is urban renewal,” Doug Steele said. “But it was a tough way to get it.

“I don’t mind that we went through it, but I wouldn’t want to do it again.”