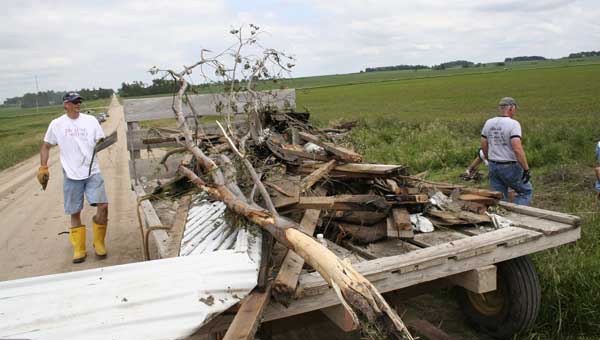 Mark Smed tosses a shingle on a hay rack on June 20, 2010, along 700th Avenue north of Armstrong. If people didn’t know where Armstrong was before, they knew now. -- Tim Engstrom/Albert Lea Tribune

One year ago today, as soon as the storms passed neighbors were out checking on each other, ducking under downed power lines and stopping their vehicles right on the road to talk to each other. 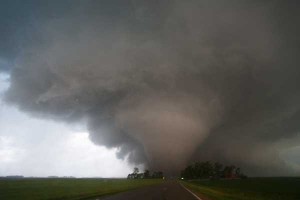 A tornado moves across the rural Conger countryside one year ago today. This image was shot from Freeborn County Road 4 generally south of this tornado, which was increasing to EF4 strength at this point. -- Benjamin Tillotson/TCS.net

Early the next morning neighbors showed up to devastated houses to volunteer their services. In the small town of Armstrong, where many people had trees knocked down, everybody helped everybody to clean up the mess.

“My neighbors were working, and we went over and helped them out,” David Lawson said.

Lawson said after cleaning up his own place he wanted to help out his neighbors. The Freeborn County chapter of the American Red Cross was flooded with people who wanted to volunteer.

Director Jeanie Opdahl said there were hundreds of people who came to volunteer in the days that followed the June 17, 2010, tornadoes.

Opdahl said one of the first calls she received was from people from another state who wanted to know how they could help. 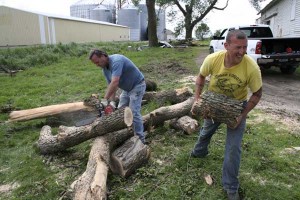 Zac Stuart hauls a log sawed by David Lawson on June 20, 2010. In Armstrong, neighbors were helping neighbors with the cleanup of fallen debris from the June 17 tornadoes.

Volunteer efforts were organized through a hot line that connected to the Red Cross, basically starting on the third day after the tornadoes and going for two to three weeks or until the last cleanup event was done. If tornado victims needed help, they called the number, and when volunteers wanted to help they would be directed to where help was needed.

People walked through the fields, gathered fallen branches, picked up debris or helped in any other ways.

“It was very rewarding,” Opdahl said. “I think a lot of people were surprised at how when maybe three or four of them went out to help, just how many other people were already there or who came by to help.” 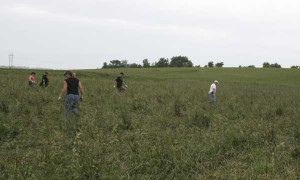 AgStar employees clear debris from a field in Manchester on June 21, 2010. See aftermath data from the National Weather Service on the tornado outbreak in the Sunday Tribune. -- Sarah Stultz/Albert Lea Tribune

Opdahl said it was a gratifying experience to be a part of.

West Freeborn Lutheran Church organized meals for volunteers for much of that time and also acted as a central location for people to bring photographs they had found that might belong to someone else.

While the church wasn’t hit or damaged at all during the tornadoes, much of the surrounding area was. The church acted a safe haven for many of the tornado victims to take a break from the cleanup, partake in a meal and share their stories with others. Numerous donations of food and money came in to help the cause.

Even companies wanted to help out when they heard of the damage in the area. Employees from the Blue Earth branch of AgStar heard of clients and neighbors of their clients who had been hit by the storm and immediately wanted to help. The next day people were in Freeborn County volunteering, and Deb Steinfeldt, a financial services officer, was asking other AgStar branches throughout the Midwest for more help.

“Everyone wanted to pitch in,” Steinfeldt said.

Employees from Wisconsin and northern Minnesota came to volunteer, and Steinfeldt said even if someone wasn’t physically able to work they donated food or worked in the office so more people could work at the storm sites.

“They were pretty astonished at the number of volunteers,” Steinfeldt said.

Even though the AgStar employees work in Blue Earth their clients are in Freeborn County, and most loan officers have known their clients for a long time. There were at least 70 clients affected to varying degrees including flattened homes, destroyed buildings and ravaged fields. Steinfeldt said the company didn’t help out for the recognition they could get.

“These people are our friends,” Steinfeldt said. “We didn’t do it for us.”

Steinfeldt said volunteers continued working for almost three weeks because as soon as one field was cleared of debris they’d find another.

“It’s kind of neat to see where people are willing to step up and help those in need,” Steinfeldt said.

“I think this is a very compassionate, caring community,” Opdahl said. “Anytime there’s a disaster, it seems like no matter what it is, the people rally together. They’re right there to help each other, whether they know the people or not.

“We have to be very appreciative of the wonderful, caring people in our community and how lucky we are to live in a community where people do care and are willing to come out and help each other.”