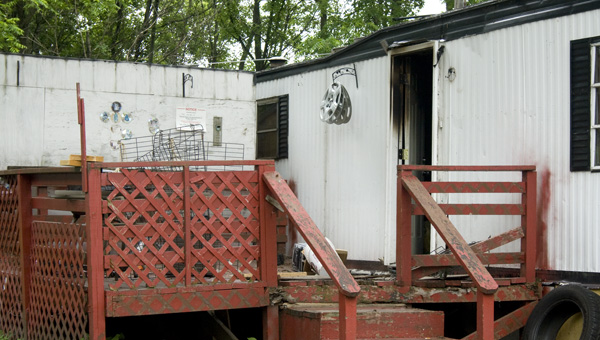 Albert Lea firefighters placarded this trailer, 712 Larimore Circle, on Monday after a fire damaged the home on Sunday night. Authorities were still investigating the cause of the fire. -- Sarah Stultz/Albert Lea Tribune

A trailer in the Rainbow Terrace trailer court was destroyed by fire Sunday night in Albert Lea.

Albert Lea firefighter Bart Berven is estimating the trailer, at 712 Larimore Circle, is a total loss.

He said the fire enveloped the roof and walls of the structure, and it is expected to be placarded today.

Authorities are still investigating the blaze and expect to release more information Tuesday.

Berven said firefighters were dispatched to the trailer at 10:16 p.m. Sunday.

When they arrived, fire was coming out of the door and windows of the structure.

The one occupant at the residence, Italio Gomez, had made it safely outside without any injury.

The park manager and his brother had come to the scene and tried to put water on the trailer, but the fire built too quickly.

Look to the Tribune in print and online for more information as it becomes available.