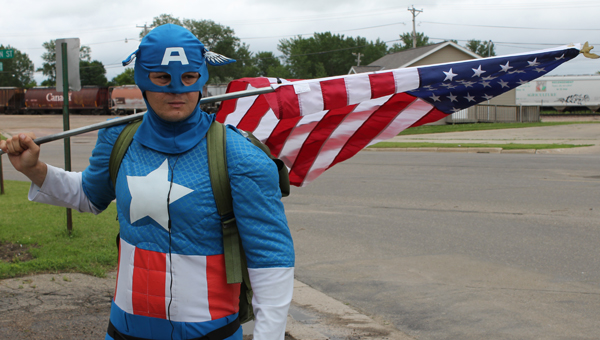 If you were driving east on Main Street toward Kwik Trip around noon Wednesday, you probably did a double take at the unusual sight. A man dressed as Captain America, proudly carrying an American flag, was making his way through town.

Allen Mullins, the man behind the costume, has created a stir in countless cities throughout the United States. Starting on Jan. 5, 2009, Mullins has been walking to state capitols across the nation in hopes of bring attention to the homelessness of veterans.

“I’m not a veteran, I’m just doing what I feel citizens should be doing,” Mullins said. “We need to show them someone cares. It brings the life back into people.”

Mullins has visited a total of 32 state capitols so far. Before his walk through Albert Lea toward St. Paul, Mullins was in Des Moines, Iowa. Mullins has walked an estimated 17,500 miles. After stopping in every state capitol, he plans to walk the outline of each state, then the outline of the entire United States.

What does Captain America have to do with bringing awareness to veterans?

“If it wasn’t for the costume, I wouldn’t be getting nearly as much attention,” Mullins said. “I have to do something to get people to come and talk to me. If I were to just go up to people on the street and start talking about how we need to help our veterans, they’d consider that harassment, but dressing up as Superman or Captain America gets people interested in what I’m trying to do.”

For more information, contact Mullins via email at supermanwalking@gmail.com or call the VFW at 903-723-8120.