Funeral services for Viola Louise Ladwig, 90, of Albert Lea, will be held at 10:30 a.m. Thursday at Trinity Lutheran Church in Albert Lea. The Rev. Curtis Zieske will officiate. Interment will be at the Bear Lake Concordia Cemetery. Visitation will be from 4 to 7 p.m. Wednesday at Bayview/Freeborn Funeral Home and one hour prior to the service at the church. To sign the guest book, go to www.bayviewfuneral.com. 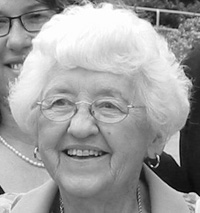 Viola Louise Ladwig was born March 23, 1921, to George August and Marie Barbara (Reim) Wichmann in rural Conger. She grew up in Conger where she attended District 89 school. Viola was baptized and confirmed at Bear Lake Lutheran Church. On Oct. 5, 1947, Viola was united in marriage to Herbert Ladwig at Bear Lake Lutheran Church. Viola was a member of Trinity Lutheran Church where she was active in Sunday Morning Bible Study, Circle Bible Study, Trinity Fellowship and was a faithful worshipper. Viola worked at St. John’s Lutheran Home in the kitchen for 25 years, she enjoyed being a part of the retiree monthly coffee group that met at Trumble’s. She was an avid reader and ever curious learner, she could be found starting her day at Trumble’s Restaurant reading the newspaper (comics first) over coffee. Quick with a smile and exceptionally well-versed in current events, “Viola; Grandma Vi” never stopped lighting up rooms and hearts with her quick wit, charm, words of wisdom and genuine love of life. She found great happiness in cooking and baking for loved ones and friends, rug-making, quilting, watching her birds (patrolling for squirrels), gardening, scrapbooking, playing the piano or organ, a great game of whist and listening to WCCO, Jim Gilbert and her beloved Twins, Vikings and Gophers. Her greatest joy was caring for and spending time with her children, grandchildren, great-grandchildren and extended family; including her caring neighbors and special friends at Trinity Lutheran Church, Trumble’s Restaurant and Alanon. A highlight for Vi was celebrating her 90th birthday with family and friends.