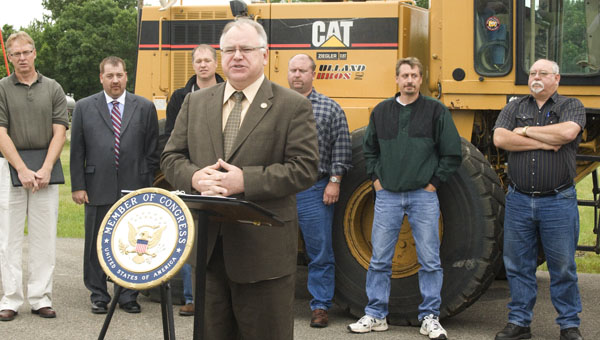 In the middle of a looming American energy crisis, 1st District Rep. Tim Walz and a group of other congressional leaders have come together to promote a new energy policy that Walz said could contribute to long-term economic stability.

Local energy, labor and business leaders gathered with Walz on Friday at Ulland Bros. in Albert Lea as he unveiled a new plan created under bipartisan support that is aimed at opening up more of the country’s coastline to offshore drilling for oil and natural gas.

Under the bill — the Infrastructure, Jobs and Energy Independence Act — royalties and other revenues received from leasing the shore for offshore energy production — trillions of dollars — would be dedicated to creating jobs, cutting the deficit, investing in clean coal and nuclear technology, cleaning up the environment, increasing renewable and alternative energy sources and rebuilding highways and bridges.

Walz, a Democrat from Mankato, said the bill would put America on the path to energy independence, while at the same time investing in the country’s future.

The legislation was created through the Bipartisan Energy Working Group, which includes congressmen from Pennsylvania and California, along with Walz.

Specifically under the bill, revenues would be dedicated the following:

• 30 percent to the states where the additional off-shore drilling occurred to help expedite the process of exploration and production of resources.

• 10 percent to the Federal Treasury to help shrink the deficit.

• 8 percent to the research, development and construction of clean coal plants.

• 5 percent for development of carbon-free technology and nuclear energy.

• 3 percent for conservation efforts, to protect America’s land, water and air for the next generation.

• 3 percent for modernizing and rebuilding America’s water and wastewater infrastructure.

• 2 percent for the Low Income Home Energy Assistance Program, which provides energy assistance to the elderly and people with low incomes.

He noted that the proposal has gained support from both Republicans and Democrats. Local energy leaders also appeared to support it on Friday.

“This legislation is proof we can put our partisan differences aside and work together to find common-sense solutions,” he said. “Continuing to send our money to countries overseas that hate us just doesn’t make any sense … We need a dedicated funding stream to invest in homegrown, clean energy technology. With entrepreneurship and an American can-do spirit, we can create good-paying jobs right here at home.”

Walz anticipated the bill would probably not become a reality until the next presidential election.

He said the problems with America’s energy future aren’t new but figuring out what to do about them are becoming a priority with gas at about $4 a gallon.

Jeff Carlson with Ulland Bros., who hosted Walz, called the bill an “exciting” one that could have a great impact on businesses.