A.L. has festivities for all ages 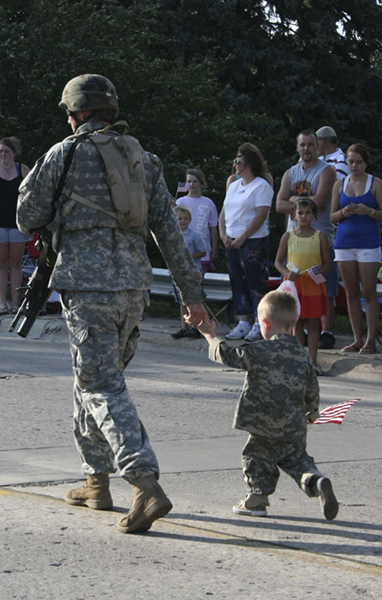 A soldier walks with a patriotic boy at the parade on Saturday evening. -- Kelli Lageson/Albert Lea Tribune

There’s always a lot to do in Albert Lea for the Fourth of July holiday.

Whether it’s extra excitement through Crazy Days in downtown Albert Lea, a car show, a carnival, a parade or fireworks, there’s plenty of family friendly events for all ages.

“It’s a great time when families come in for the Fourth of July,” said Susie Petersen, executive director of the Albert Lea Convention and Visitors Bureau. “We have a lot of activities going on, and with the price of gas, there’s a lot of things going on right here in our own hometown. You don’t have to leave to go anywhere to have a good time.”

With the success of Crazy Days in downtown Albert Lea last summer, downtown business owners again opened up their stores for extra hours and are hosting sales for customers today and Saturday.

“I think it’s a great time to incorporate our businesses with the actual people in town,” said Linda Knudsen, owner of Plymouth Shoes.

On Thursday stores were open from 8 a.m. to 8 p.m. Knudsen said it will be up to individual merchants to determine how long they will be open today and Saturday.

Food vendors will be downtown on all three days and Merriam’s Midway Carnival will open today, and continue through July Fourth.

On Saturday, the CVB and American Legion Leo Carey Post 56 will sponsor its second annual car show on Broadway Avenue, between Fountain Street and the Legion building.

Petersen said people can enter their cars into the show, and then the public will vote on their favorites.

The Legion will also open its outdoor patio today, which will continue on Saturday and Sunday. 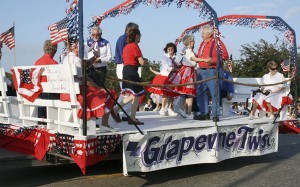 The Grapevine Twist Square Dancers performed for the crowds during the Third of July Parade in 2010. -- Kelli Lageson/Albert Lea Tribune

There will also be a comedy show, featuring Jeff Polis tonight.

On Sunday, the highlight of the day will be Albert Lea’s annual Third of July Parade.

Tami Jensen, operations manager at the Albert Lea-Freeborn County Chamber of Commerce, which organizes the annual parade, said people can start bringing their floats to the Freeborn County Fairgrounds at noon that day with lineup for the parade beginning at 5:30 p.m.

The parade itself is scheduled to begin at 6 p.m. This year’s theme is “Freeborn County: Past, Present, Future.”

The parade begins at the fairgrounds, travels down Bridge Avenue, along Fountain Street and ends at Central Park — generally lasting two hours.

On the Fourth of July, the Bayside Ski Club will present its ski show at 1 and 2 p.m. This year’s theme is “Las Vegas.”

Club director Kristen Dulas said the show should be action-packed with the entertainment and music from Las Vegas mixed with the local talent in Albert Lea.

Snacks and beverages will be available for purchase at each show. 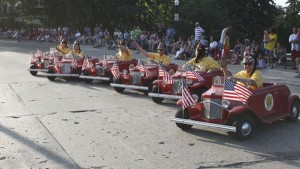 One of the groups of Shriners lined up and waved to spectators. -- Kelli Lageson/Albert Lea Tribune

Attendants are asked to bring their own chair or blanket and sunglasses. The show is free to the public but donations are accepted.

Right before dusk, the Albert Lea Community Band will assemble at the Fountain Lake Park gazebo to perform music for community members at the park.

Fireworks will follow from City Beach at dusk, usually around 10 p.m.