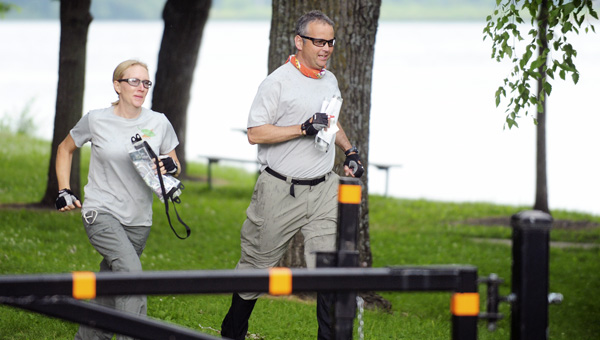 A team of adventure racers carry maps through Edgewater Park Saturday during the Minnesota Orienteering Club Adventure O. The race drew around 70 participants from five states but none from Albert Lea. -- Andrew Dyrdal/Albert Lea Tribune

Myre-Big Island State Park was full of adventurers Saturday despite the state shutdown.

The Minnesota Orienteering Club Adventure O was held in Albert Lea and drew around 70 participants from six states. The event was an orienteering race and the club’s primary event. Orienteering is a sport in which participants use a map and compass to find their way to various checkpoints planted around rough country. The team to find each checkpoint and finish the race in the lowest elapsed time wins.

Saturday’s race began at 9 a.m. at Edgewater Park’s north pavilion. The participants gathered in teams of two or four and received a topographical map two minutes before the race began. Once the clock started, the teams scattered in every direction seeking checkpoints.

Scott Erlandson, of Albert Lea, who helped organize the event, said the 44-mile race included four miles of paddling, 10 of trekking and 30 of bicycling. The racers trekked two miles in Edgewater Park searching six checkpoints before biking to the Brookside Boat Landing to begin a four-mile paddle on Fountain Lake.

After clearing four checkpoints on the water, participants biked the state park to ride mountain biking trails before another five-mile trek and bike ride back to Edgewater Park to finish.

Erlandson, who also adventure races, said he was asked by some friends to host the Adventure O. Erlandson said Albert Lea was a prime candidate for the race because of its natural resources, including lakes, bike trails and the state and city parks.

“The community, including the fire department, city, medical service and Department of Natural Resources, have been very friendly and willing to work with us,” Erlandson said. “The whole community has been very supportive.”

A member of the Minnesota Orienteering Club, Justin Bakken, charted Albert Lea and created the topographical map used during the race. Erlandson said this was the first orienteering race Albert Lea has hosted but nobody from the community participated in the event.