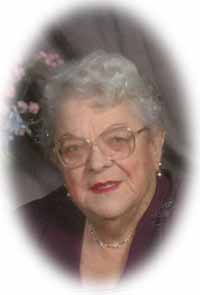 Funeral services for Alice Katherine Chrz, 86, of Albert Lea, will be held at 1 p.m Wednesday at Oakland Lutheran Church. The Rev. Bob Berthold will officiate. Burial will be at the Bohemian National Cemetery. Visitation will be Tuesday from 5 to 7 p.m. at Bayview/Freeborn Funeral Home and one hour prior to the services at the church. To sign the guestbook go to www.bayviewfuneral.com.

Alice Katherine Chrz was born on July 12, 1924, in Hayward township, the daughter of Frank and Mary (Mudra) Kycek. She attended country school in District 35 and was a member of Oakland Lutheran Church and the Western Fraternal Lodge No. 44. Alice was united in marriage to Frank Chrz on July 5, 1941, in Albert Lea. The couple farmed in the Oakland area until their retirement. Alice was devoted to her family who was always there for all of them. She enjoyed sewing quilts at home and at her church where she enjoyed the fellowship with all her friends. Alice could always be found in the church kitchen where she made coffee for whatever the occasion may have been. She’ll be missed by her family and many friends.

Alice was preceded in death by her parents; husband, Frank; son, Eugene; and one brother.