All the bases covered 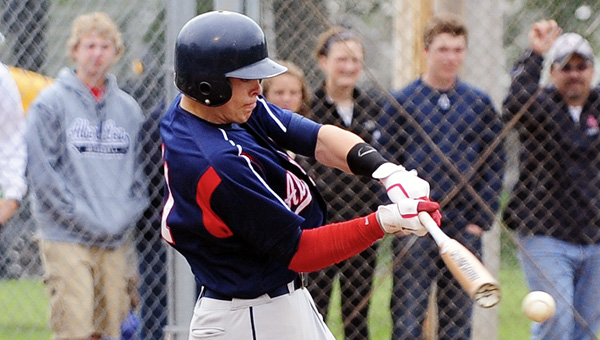 Albert Lea's Cole Sorenson, above, was the top offensive player for the Tigers this season. -- Andrew Dyrdal

The Albert Lea Tigers baseball team’s season ended on a sharp note this season with a season-ending loss to Rochester Mayo in the Section 1AAA quarterfinals.

The Tigers’ season started out as a dream as the team won 11 of its first 13 games en route to a first-place standing in the Big Nine Conference.

While the Tigers lost three of its final seven, falling into a tie for second place in the conference, the title run wouldn’t have been 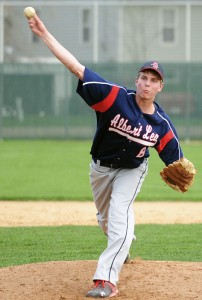 Aaron Klatt led the Tigers with an 8-1 pitching record this season. -- Andrew Dyrdal

possible without the consistent pitching of Aaron Klatt and hitting of Cole Sorenson.

The Tigers duo, who also served as a 1-2 punch on the mound, were key components of the best Albert Lea baseball season in recent memory.

When Klatt was on the mound the Tigers usually won. The team won eight of the nine games the All-State pitcher started, and opponents hit at a .222 percent clip.

These numbers helped the Tigers finish 13-5 in the Big Nine and 16-6 overall.

Klatt and Sorenson entered their senior season with high expectations after a disappointing and quick exit from the Section 1AAA first round during the 2009-10 season.

“We had a good group of seniors back,” Klatt said. “We wanted to do better than last year and make that trip to state.”

A trip to the state tournament looked like a real possibility after the Tigers rattled off six straight wins to open the season before being swept by Rochester Century. Sorenson called the team’s first two losses eye-opening.

But the Tigers drew back on course and won their next five games before losing two straight again — this time to Owatonna and eventual Big Nine champion Rochester John Marshall.

“We kind of looked ahead a little bit,” Klatt said. “We thought ‘If we win one out of two we have a chance (to win conference)’ instead of going game by game.”

With a sweep of Mankato East on May 17, the Tigers had a shot at the league title against John Marshall on May 23 in Rochester but lost 12-6. The Tigers beat Austin to end the regular season in a tie for second place, and beat Winona in the opening round of the section tournament setting up a single elimination game against Mayo at Hayek Field.

Against Mayo, the Tigers fell behind 1-0 in the first inning but tied the game in the third. After three scoreless innings, Mayo took the lead 2-1 in the top of the seventh and the Tigers weren’t able to draw even, ending its season.

Sorenson pitched in the final game for the Tigers, allowing five hits while striking out eight and walking five. Sorenson pitched well enough to win but didn’t receive the run support he needed.

“Overall, I think I did well,” Sorenson said, of his performance in the Tigers season-ending loss. “In the sixth and seventh (innings) my control was a little off but I kept them in the game.”

Klatt played at shortstop against Mayo after pitching the previous postseason game against Winona, and said he had no problem not pitching.

“We all had great confidence in Cole on the mound,” he said. “He was throwing really well.”

Klatt and Sorenson said they were both disappointed in not achieving their goal of a state tournament berth but had a lot of fun on a team packed with seniors.

“I was pretty mad,” Sorenson said, “especially being a senior.”

Klatt called it a “sad moment” and said he replayed in his mind the ends of the football and basketball seasons.

Klatt was model of consistency on mound

For a team that struggled to score runs on any given night, Klatt gave the Tigers a chance to win every game.

Klatt struck out 55 batters in 58 innings and led the team with a 1.33 ERA, down from the 2.27 ERA he posted during his junior season.

Klatt said his curveball dropping was the biggest improvement this season and that he had the confidence his team could win every game he pitched in.

While Klatt’s pitching numbers improved this season, his offensive production did not. Klatt batted .269 this season after batting .404 last year. Klatt attributed the drop to a number of factors.

“I started the season in a (hitting) slump and when you do that your confidence goes down,” Klatt said. “I was more focused on pitching this season and got into a bad rhythm. We didn’t have the best weather in the spring, and while you can’t blame it on that it did have a factor.”

Klatt did, however, drive in a team-high five home runs.

Klatt dealt with college recruitment during the season before signing a National Letter of Intent to play baseball for South Dakota State University in Brookings, S.D. Klatt was also recruited by Winona State University, among others.

He said after throwing in college showcases last summer, he wasn’t as nervous this year pitching in front of college scouts. Once Klatt settled on a school, he called it a “weight lifted off my shoulders.”

“Before that I was pitching to impress,” Klatt said. “After it I was doing it for the love of the game.”

Klatt said in order to make the jump to Division I college baseball, he needs to work on his curveball and develop a changeup. He also said he expects to be a reliever during his first season for SDSU but hopes to work into the starting rotation. He said he hopes to bat but if not will just focus on pitching. Klatt plans on majoring in athletic training.

Sorenson was a multi-tooled player

Sorenson said he wanted to do whatever he could to help the team win this season. He did both with his arm and bat.

Leading the Tigers in most offensive categories, Sorenson also led the team in innings pitched (67), opponent batting average (.199) and strikeouts (71).

Sorenson said he was a more consistent hitter than pitcher, but he was pleased with how he performed at both.

“I kept the team in it a lot this year by hitting as many RBIs as I did,” Sorenson said. “My ERA was around two or three for the season and that’s all coach could ask for.”

Sorenson signed a National Letter of Intent to play baseball for Bemidji State University in February. He plans on playing in the outfield. He also plans on majoring in sports management or finance.