Funeral services for Bernhard E. Johnsrud (Bendy), age 83, of Albert Lea, will be held at 11 a.m. Saturday at East Freeborn Lutheran Church. The Rev. Matthew Griggs will officiate. Interment will be at the East Freeborn Cemetery with military honors accorded by Freeborn County area veteran’s organizations. Visitation will be from 5 to 7 p.m. Friday at Bayview/Freeborn Funeral Home and one hour prior to the service at the church. To sign the guest book, go to www.bayviewfuneral.com. 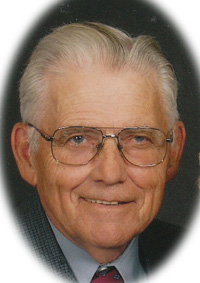 Bernhard E. Johnsrud Jr. (Bendy) was born on Jan. 23, 1928, the only son of Bernhard and Clara (Stadheim) Johnsrud Sr. He was a lifetime resident of Freeborn County and was baptized and confirmed at East Freeborn Lutheran Church. Bendy graduated from Albert Lea High School in 1946. Bendy served in the United States Air Force in San Antonio, Texas. On March 30, 1957, Bendy was united in marriage to Donna Lee Davidson at the Methodist Church in Nashua, Iowa. He held a private airplane pilot’s license and loved to fly over Freeborn County viewing the crops and beautiful lakes on Sunday afternoons. Bendy was a dairy and crop farmer, seed corn dealer for Golden Harvest, insurance agent for Farmer’s Insurance and he had an eye for buying and selling cattle. He was an active member of East Freeborn where he held various positions from president to treasurer over the years. He was a member of the Elks, VFW and the American Legion. Bendy enjoyed hunting, fishing, buying/selling cattle and watching the wildlife on his farm. His greatest enjoyment was the time he could spend with his grandsons.