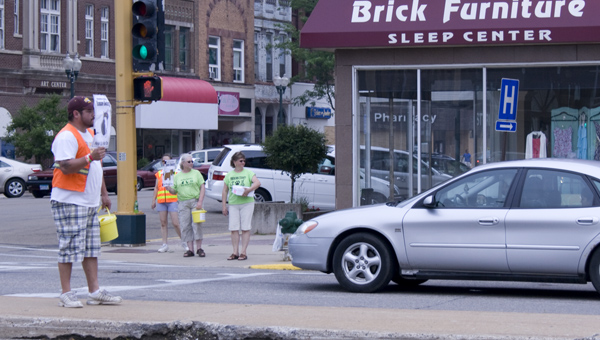 Standing at the intersection of Main Street and Broadway Avenue with buckets for donations, the volunteers held signs with illustrations of dogs and cats as they held out buckets to collect money. Some animals from the shelter even came out for short periods of time. 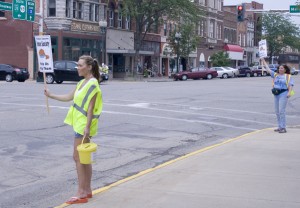 All money raised will go toward the operations costs of the animal shelter.

“People really stepped up again,” said Humane Society board member Kim Storvick. “It couldn’t have come at a better time.”

She said the fundraiser was scheduled to run from 8 a.m. to 6 p.m.; however, with heavy rain at about 4:30 p.m., the group had to end early. It also rained in an earlier shift during the day.

Volunteer Karon Rynerson, who fosters cats for the Humane Society, said she was one of the people who stood through the morning rain.

“These animals need a voice and they need a place to live,” Rynerson said. “There’s way more out there that need homes.”

She said she was touched by the many people who donated, especially a young girl who decided to give all the money out of her wallet.

“It was so sweet to see that,” Rynerson said.

The fundraiser came as the Humane Society is starting construction on an addition to the nonprofit organization’s building.

Volunteers said with all the donations people have been making to support the building expansion, there have not been as many donations made toward operations costs.

She said the organization operates solely on donations.

As of last week, the Humane Society was providing shelter to 26 cats and 17 dogs, and there were an additional 20 cats and two dogs in foster care.

At one point during the last year, the nonprofit organization provided shelter to more than 70 cats and kittens.