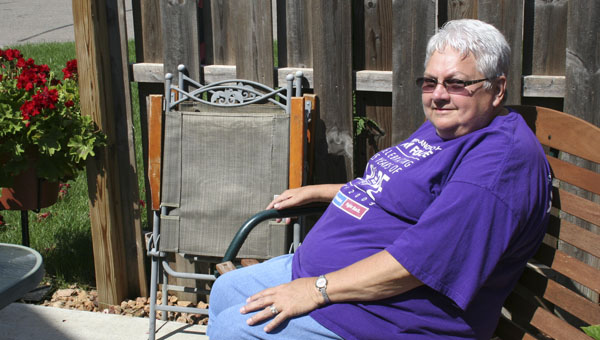 Georgia Godtland sits outside her home. She often keeps herself busy by doing housework, such as taking care of her flowers. -- Nya Lony/ Albert Lea Tribune

It started with a series of flu-like symptoms.

After 2 1/2 weeks, Georgia Godtland still couldn’t shake it; she just wasn’t getting any better. She left work and went to urgent care, where she was admitted to the hospital.

After a couple of days, on a Friday, she was sent up to Rochester. The following Tuesday, she had a tumor the size of her kidney removed. And she lost the kidney, too.

Godtland was diagnosed with kidney cancer in 2008.

“It was devastating, hard to take,” Godtland said. “It’s something you never want to hear.”

Godtland is one of the two honored survivors of the 2011 Freeborn County Relay for Life, an annual fundraiser in mid-August at the Freeborn County Fairgrounds that benefits the American Cancer Society.

Upon discovering she was chosen as one of the honored survivors of 2011, Godtland said she felt nervous and honored. Rasmussen said she and her siblings helped their mother write her speech.

“My family has been encouraging me,” Godtland said. “I’ve been practicing my speech at the cancer support group. It’s so nerve-wracking, but I’m excited.”

Godtland is looking forward to the Relay for Life in August. She said the people from Relay for Life and the Cancer Support Group are all great people and she gets a lot of support from them.

“We have a team and we’ve been raising money all year,” Gotland said. “I think we’ll have a pretty good total when we get there.”

Godtland has many reasons to keep pushing forward including the support from Relay for Life and the Cancer Support Group.

“I love life,” Godtland said as she smiled. “It’s about quality, not quantity.”

After removing her kidney, Godtland’s doctors thought they got it all. However, three months later, the cancer had metastasized. On May 13 Godtland had another surgery, this time on her spine. What the doctors believed to be fractured vertebrae was actually the cancer. It had destroyed her first two vertebrae and started on the third. Luckily, they caught it in time before it resulted in paralysis.

“It’s hard,” said Janelle Rasmussen, one of Georgia’s three children. “Nothing prepares you for finding out your mom has cancer and especially because we lost our father to cancer. It changes your life. It’s like when you needed your parents the most, they end up needing you.”

Since her diagnosis, Godtland has undergone two rounds of radiation therapy. She started her third round on July 19 in Rochester.

“My doctors told me my cancer isn’t curable, but it’s treatable,” Godtland said. “The Albert Lea Medical Center has a wonderful cancer center and is well-affiliated with Rochester. I am well-assured I’m getting the best care.”

Godtland doesn’t let her prognosis stop her from living life. In fact, her attitude is one of the factors that led to her being chosen as one of the Honored Survivors of 2011.

“My mom has always kept a very positive attitude,” Rasmussen said. “Sometimes she gets down, but she always finds a way to be optimistic again.”

Her kids and grandkids are her main reasons to keep going. She also has her strong faith and her job to keep her grounded.

Godtland has worked at Sibley Elementary School for the past two decades. Her treatments and the recent spinal surgery made working nearly impossible. According to Godtland, it’s still uncertain if she’ll be able to go back to work.

“My goal is to finish radiation and go back to Sibley,” Godtland said. “I’ve been there 20 years, I’ll never get out of elementary; I love it.”

She is a member of Zion Lutheran Church. Godtland said all of the members of her church have been great in supporting her through everything.

“You have to have faith,” Godtland said. “If you don’t believe in something, you’ll never make it.”

Godtland spends as much time with her children and grandchildren as possible. She attends their ball games and takes them on weekly park visits. They keep her busy.

“The ticket is to keep busy,” Godtland said. “When you have too much time, you start to think about all the bad things and you get sad.”

Through keeping herself busy and with the support of her family, Georgia Godtland continues to be positive about her future.

“Our family motto is: ‘Today is a great day, let’s go with it. If tomorrow is a bad day, we’ll deal with it when it comes.’” Rasmussen said. “As a family, we focus on right now because life is too short.”