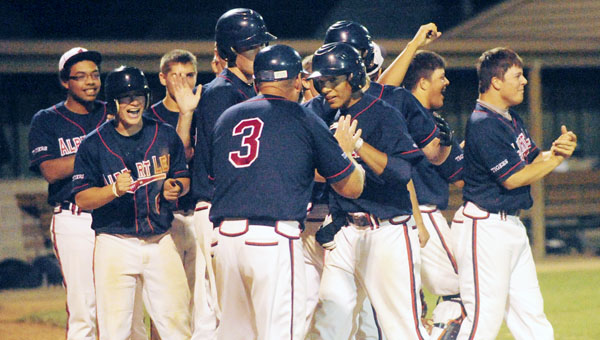 Makael Lunning showed no signs of coming out of his slump.

The right-handed junior was 0-for-7 with five strikeouts in the District 1 Tournament when he approached the plate Thursday in a crucial situation.

With two runners on base and two outs in the eighth inning, and the Albert Lea Post 56 baseball team clinging to an 8-7 lead, Lunning blasted a three-run homer over the left-field fence. Lunning was mobbed at home plate after sealing the Tigers’ 13-7 win over Winona in the District 1 quarterfinals at Hayek Field. 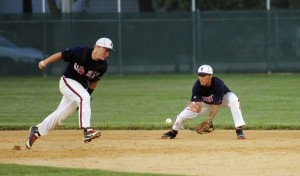 “I was relieved and speechless,” Lunning said. “I’ve been trying to put good swings on the ball. I just wanted to come through for my team in that situation and it worked out.”

Lunning’s home run capped a dramatic eighth-inning rally by the Tigers. Trailing 7-6 with two outs and nobody on base, Cole Sorenson and Cody Haaland reached on consecutive walks and put the go-ahead run on first base.

J.T. Bellrichard then gave the Tigers its second lead of the game with a towering two-run double that flew over the head of Winona’s center fielder Brandon Beech and reached the fence. Bellrichard moved to third on the throw home, and Tyler Woodside was hit by a pitch to extend the inning and cue the unlikeliest of heroes.

On a full-count, Lunning barely made contact with the pitch and fouled it back to the screen. The next pitch left the ballpark.

With two outs, the Tigers sent eight batters to the plate in the eighth and scored five runs to put the game out of reach. The Tigers added two more in the ninth for the 13-7 final.

There were four lead changes in the nine-inning game, which began 50 minutes late and lasted 3 1/2 hours before ending at 11:20 p.m. The Tigers came back from two three-run deficits and took advantage of Winona’s mistakes. Winona committed seven errors, walked nine batters and hit five. Meanwhile, the Tigers were able to manufacture 13 runs on nine hits. 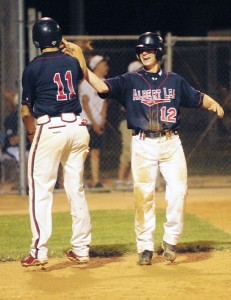 Despite the win, the Tigers and starting pitcher Cole Sorenson got off to a bad start. Sorenson threw his worst first inning of the season as he walked four of the eight batters he faced.

After allowing a leadoff infield single to Winona’s Hunter Ganoke, Sorenson walked Beech and Zack Benson to load the bases. Lance Jensen then hit a two-run single to right field to give Winona an early 2-0 lead with no outs. Jensen was caught stealing second base and Trae Cierzan walked before Steve Tofstad hit an RBI ground out to first base. With two outs, Sorenson walked a fourth batter, Joe Miller, to load the bases a second time before Jordan Ramine fouled out to the catcher Connor Kortan.

“I told him ‘You’ve got to toughen up,’” Tigers coach Jack Kortan said. “You can’t throw curveballs all the time. I said ‘If you can’t control your fastball to establish that then you’re not a pitcher.’ After that he started throwing faster with his fastball and with his curveball he was striking guys out.”

Sorenson settled down after the first inning, sending Winona down in order in the second and allowing no more runs through four innings. In the fifth, though, he started to run out of gas.

With the Tigers holding on to a 4-3 lead, its first of the game, Sorenson walked the first two batters to start the bottom of the sixth. Kortan pulled Sorenson, moving him to center field, and sent in Woodside in relief. Kortan said regretting that move briefly crossed his mind.

Entering with two runners on and no outs, Woodside gave up an immediate single to center field, but Ramine was forced out at third base on a strong throw from Sorenson to Aaron Klatt. Woodside then gave up an infield single to Beech to load the bases, and Benson hit a sacrifice fly to center field to score Christian Kuehner from third base and tie the game.

The damage wasn’t nearly done. As soon as the reeling Winona squad tied the game, all frustration was released when Jensen hit a three-run, line drive home run to left field to give them a 7-4 lead. Winona’s dugout erupted as soon as the ball left the bat. Woodside then got the next batter to ground out to end the inning.

“I had to put that behind me,” Woodside said, of the three-run homer. “I knew there was nothing I could do about it now, and I had to keep us in the game. I knew we had a chance with how well we’ve been hitting the ball lately.”

Woodside was right. The Tigers quickly got two runs back in the top of the seventh inning when Sorenson scored off a fielding error, and Bellrichard hit an RBI sacrafice fly to score Haaland. Down a run, the Tigers nearly took the lead with two outs and runners on first and second when Ethan Abben hit what appeared to be a home run off his bat to left field but it was caught at the fence. Winona players leaped into the air and celebrated having maintained their lead.

But Woodside shut Winona down for the next three innings, striking out four and getting plenty of run support.

Tensions ran high during the game on the field, in the dugouts and bleachers. Winona players exhibited plenty of frustration throughout the game, tossing bats and throwing helmets in the dugout. Some made it verbally clear they didn’t want to bat with runners in scoring position and the game on the line.

With the win, the Tigers play in the tournament’s semifinals at 1 p.m. Saturday against the Rochester Redhawks. A loss would have put the Tigers in the loser’s bracket with a game slated for 7 p.m. tonight. Had that been the case, with the Tigers’ top three pitchers, Klatt, Sorenson and Woodside, and Haaland unable to pitch, Kortan would have needed to go to his fifth option in either Dylan See-Rockers or Jon Mittag. Instead, the team’s No. 1 pitcher, Klatt, will be able to pitch with the district title game on the line.

“This was huge,” Kortan said of the win.