Services were held on Thursday, July 14, 2011 for Darcy (Oppegard) Haverly at Rafter J Cowboy Church in Terrell, Texas. Darcy is a former Albert Lea resident. She died on July 10, 2011, from complications of pancreatic disease and emphysema. 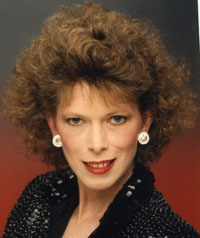 Darcy was born in Albert Lea on June 17, 1961. She was baptized and confirmed at Zion Lutheran Church, and she graduated from Albert Lea Senior High School in 1979.

Darcy is survived by her husband, Bob; her parents, Con and Shari Oppegard, of Rowlett, Texas; a brother, Douglas, and a sister, Debra, both from Rowlett, Texas. Also, Don and Dot Haverly, Eustace, Texas, her parents-in-law and two brothers-in-law: John and wife, Peggy, of Eustace, Texas, and Kenneth and wife, Sue, of New Preston, Conn.; and a sister-in-law, Deborah, and husband, Mike Jock, of Bethlehem, Conn. Survivors also include an uncle, Gary Walker, and wife, Karen, of Frisco, Texas, and two aunts: Helen and husband, Terry Pelcher, of Pittsford, N.Y., and Carol Hanson of Plano, Texas; and several cousins. She was preceded in death by her grandparents: Lloyd and Lillian Walker and Kenneth and Florence Oppegard, all former residents of Albert Lea.

From childhood Darcy was in love with all animals and compassionate to the “underdog.” She was the friend to the child who was teased and the errand girl for those needing some extra help. While in high school she became interested in showing cocker spaniels and bought her first pure bred for showing. Later she began her own line under the kennel name “Dar-Star Cockers.” She continued with a successful line of show dogs for several years. One of her red and white cockers placed in the top 15 at a national show one year.

She was also interested in horses and amateur rodeo and spent a few years helping to train young riders in the art of barrel racing, etc.

In recent years she and her husband headed up the food distribution for Angel Food Ministries through their church. In this capacity they helped to provide inexpensive boxes of food each month for anyone who needed help stretching their food dollars. She also always had extra food in her freezers and cupboards for anyone caught in an emergency and needing help and frequently fixed and delivered a hot meal to someone with family in the hospital.

Darcy had acquired many friends in the area and will be missed by all. The hospice nurses who attended to her in her final days said she was a special patient for them and that she was getting as good a care by her husband, Bob, as she would have gotten in the hospital, so we know she was well taken care of.

She will also be missed by all of her many pets: dogs: Dally and Buddy; cats: Baby Cakes, Trouble and Rascal; and mini horses: ‘Lil Bit and Twister. Baby Cakes rarely left her side in her final days.