Memorial services for David R. Johnson, of Albert Lea, will be held at 10 a.m. Thursday at St. Theodore Catholic Church. The Rev. Tim Reker and Deacon Mike Ellis will officiate. Interment will be in St. Theodore Cemetery. Friends may visit with family one hour before the service at the church. Bonnerup Funeral Service is assisting the family with arrangements. 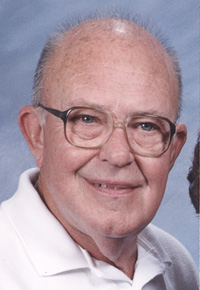 He was born on March 1, 1938, in Rochester, the son of Raymond and Virginia (Kennelly) Johnson.

As a young child, the family moved to Albert Lea and David attended St. Theodore’s Catholic grade school, where he had served as altar boy. David graduated from Albert Lea High School with the class of 1956, and he continued his education attending St. Mary’s College in Winona and later graduated from Mankato Business College.

David was united in marriage to Annette Toenges on May 21, 1960, at St. Theodore’s Catholic Church, and they made their home in Albert Lea. He had worked for Wilson & Co. for 22 years and then retired from Interstate Meats in 1999 after 20 years. David was a lifelong member of St. Theodore Catholic Church. In his younger years he enjoyed playing softball and was a par golfer. David and Annette enjoyed traveling together, taking many cruises and bus trips.

He is survived by his wife Annette of Albert Lea; two children: daughter, Julie Handley, and her twin daughters: Caroline and Rebecca of Rochester, and son, Matthew Johnson of Maple Grove; also surviving are brother-in-law, Daryl Toenges, and his wife, Jean, of New London; and nieces and nephews.

David was preceded in death by his parents, Raymond and Virginia Johnson; his father-in-law and mother-in-law, Leon and Linde Toenges, and twin sons in infancy.

In lieu of flowers memorials suggested to Crossroads Community Hospice.