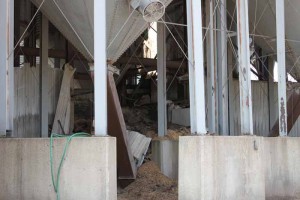 A beam gave out at the WFS grain elevator in New Richland, resulting in a spill. According to WFS inspector Michael Minnphon, the damage is minimal. -- Nya Lony/Albert Lea Tribune

According to a news release from the company, the fire started at about 7:45 a.m. Friday when the bottom of a 1,500 bushel hopper bin gave way, causing grain to spill out and a dust cloud to form.

Officials believe the steel of the hopper bottom fell against another metal object, causing a spark that ignited flames.

The release states no employees or customers were nearby when the incident occurred, but employees in the office heard the noise and then saw flames erupting from the bin.

Emergency officials were called immediately and employees evacuated the building.

Though flames erupted from the bin, they did not develop into a sustained fire.

Firefighters were only on the scene for about 30 minutes.

No damage estimates have been given at this time.

“In a situation such as this, our main concern is always the safety and well-being of our employees, customers and communities, said WFS CEO Todd Ludwig. “We were very fortunate today that no one was injured and that the fire did not cause more damage.”

According to the company, the facility will be closed while the damage is assessed and cleaned up.

Farmers wishing to deliver grain should call ahead before making the delivery.