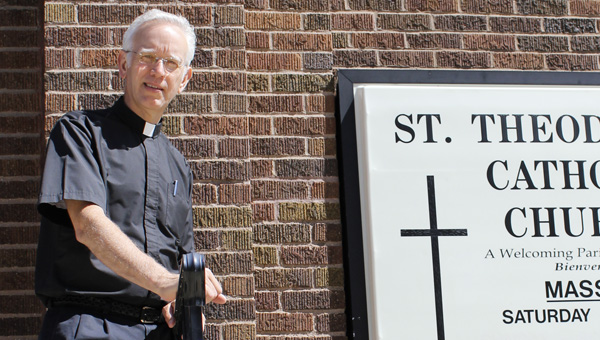 Not even a month into his appointment at the St. Theodore parish in Albert Lea and St. James parish in Twin Lakes, the new pastor said things have been going well.

The Rev. Tim Reker, 55, said everyone has been welcoming and that he looks forward to getting to know his parishioners better. He started in Albert Lea on July 1. 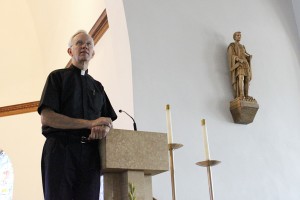 The Rev. Tim Reker poses for a photo in St. Theodore Catholic Church. He was assigned to the parishes in Albert Lea and Twin Lakes and started on July 1. -- Kelli Lageson/Albert Lea Tribune

Reker hails from St. Francis of Assisi Church in Rochester where he worked with the parish and Catholic schools. He said he’s worked with schooling for much of his priesthood.

He said he still needs to get acquainted with the school in Albert Lea and figure out any needs it may have. A general goal of his will be to increase enrollment and strengthen programs to make it a strong Catholic school.

“I look forward to getting to know people better,” Reker said.

Reker also preaches in Spanish, which he said makes worship more personable because he sometimes has to stop and ask parishioners how to say certain things. He spent a recent sabbatical studying the language.

“It engages them to know I’m not reading to them,” Reker said. “There’s stronger involvement on their part.”

Reker said he looks forward to meeting other ministers in town to work together on collaborating services and to learn more about the town.

“It’s a beautiful city,” Reker said. “I have an incredible view of the lake.”

Reker grew up in Worthington and was ordained in 1982. He said he enjoys bicycling and has ridden around Fountain Lake and on the Blazing Star Trail. He also likes reading, golfing and watching sports, including the Minnesota Twins, Vikings and Gophers. Reker said he enjoys music, museums and theater. He hopes to provide good leadership to parishioners in the area.

“My main responsibility is to teach and to administer sacraments and provide leadership,” Reker said.

Reker said he’s open to suggestions and hopes to talk with anyone who has questions or concerns. He said he’s happy to be assigned to the parishes in Albert Lea and Twin Lakes.