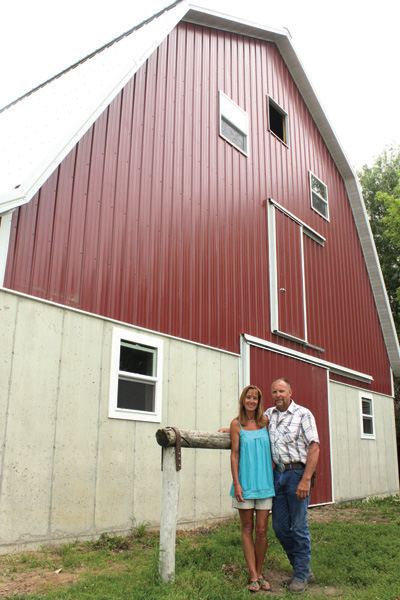 Jeff and Diana Witt pose for a photo next to their new barn. -- Matt Peterson/Albert Lea Tribune

Two things may always be the same on a farm just south of Blooming Prairie: the barns and the family that lives there.

Jeff and Diana Witt own the farm that belonged to Jeff’s parents, grandparents and great-grandparents. It’s now registered as one of Minnesota’s century farms, as it has belonged to the Witts for 103 years. Now, what may be the newest old barn in Mower County, will go to good use while standing as a symbol for what the family has always been about — farming.

Nearly 20 years ago, the Witts’ barn fell down in straight-line winds. They haven’t had good luck with barns, as the farm’s first barn burned down in the 1930s. The new barn, however, should stand to see plenty more generations of Witts.

The Witts could’ve gotten a pole shed to store their hay and keep their horses and cattle out of the elements, but they didn’t.

They built an old-style barn, with tall, concrete walls all the way around and a large hay loft on top.

The new barn is structurally sound, and it sits next to where the previous barn was buried. To build a more expensive barn was a big decision, however.

Three years ago, the Witts decided to have the concrete poured. Then the economy went sour, and they had to wait until two weeks ago to finish the structure. In just nine days, an Amish builder with a crew of three to four helpers built the barn on top of the concrete walls.

Not only are the Witts excited about their new barn, they have plenty of need for it. The family currently boards its draft horses and cattle on a neighbor’s property.

“We decided that we really seriously needed to bring them home,” Diana said.

So according to Jeff, the new barn isn’t just a symbol — it’s very practical. The Witts should be able to provide plenty of area for their livestock to get out of the elements, and they will have room for nearly 6,000 bales of hay. Keeping all of their livestock on their property also means they will have their own fertilizer for their crops. The barn alone has allowed the Witts to become more resourceful while keeping the family closer on the farm.

“We do it ourselves, and we enjoy it,” Jeff said about farming. “It keeps our family together.”

And according to Diana, Jeff’s view on farming is old-fashioned, too.

“He takes such pride in that farm,” she said. “He farms the same way his grandfather did and his father and his great-grandfather did.”

A walk around the Witt’s property will reveal how traditional they are, too. Jeff has accumulated a lot of farming history, such as antique tractors, wagon wheels, threshing machines and many old plows.

“One time I counted the plows — I was up to a hundred,” Diana said.

Though the new is made out of metal and concrete — not stone and wood — it still fits the property well where a barn had been missing for such a long time. To keep things authentic, the Witts may even build the inner stalls from the previous barn’s wood.

“I don’t want to change anything,” Jeff said about the property. “I just want to keep it the same.”

Jeff hopes one of his kids will someday own the farm.