Editor’s note: This is the first in a three-part series looking back on the Farmland Foods fire of July 8, 2001, in Albert Lea.

For more than 30 years, much of Albert Lea resident John Wojszynski’s life was secure.

But in a matter of a few minutes on July 8, 2001, that security was lifted out from underneath of him. 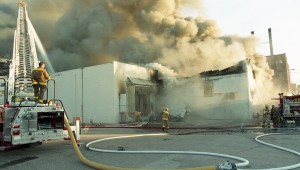 Area firefighters respond to the fire at Farmland Foods on July 8, 2001. Firefighters from every fire department in Freeborn County, along with other departments from outside the county, took part in the efforts to extinguish the fire. -- Photo courtesy Freeborn County Historical Museum

On that day, he said his source of income, insurance and friendship went up in flames as the Farmland Foods plant in Albert Lea caught fire and burned. The facility was ultimately damaged beyond repair, and the company chose not to rebuild there after encountering some other problems.

Wojszynski, who worked in the quality assurance department at the time, was one of hundreds of employees at the plant to be out of work.

“It was like a death in the family,” he said, looking back on that day. “You lose your income, you lose all the friends you’ve had there, and you lose all that in one day. You just got this hollow feeling.”

Ten years after the fire, he said, the memories of that experience and the months that followed are still fresh in his mind.

The fire is what many have called a notable moment in Albert Lea’s history.

A meat processing plant, Farmland Foods was at that time the second-largest employer in the city.

How the fire got started

Albert Lea Fire Inspector Doug Johnson said it’s hard to say how long the fire had been burning before authorities were notified.

Some workers had been cutting ceiling sprinkler pipes in preparation for a plant expansion, but ironically, some sparks from the cutting torch ignited nearby cardboard boxes and timbers. Because the sprinkler pipes were being worked on, they were inoperable.

Johnson said at about 4:45 p.m. the workers had quit for the day, but then at around 5 p.m., some of those same workers noticed smoke coming out of the same area. 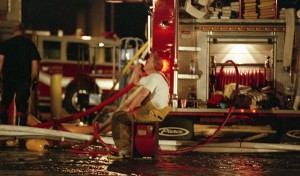 That means, Johnson said, there was at least 22 minutes — if not more — of burning before authorities were on the scene.

When firefighters arrived, they set up a perimeter attack on the fire.

When he got to the scene about 40 minutes later, he recalled a greenish-brown smoke billowing out of the loading dock area, numerous emergency personnel and many bystanders. Hoses were strung up all over the place.

Ultimately, the whole center third of the building was gutted.

Fighting the fire took two whole days and part of a third.

“We were just really lucky nobody got hurt,” Johnson said, noting that there was only a partial shift of employees working that day. Had the plant been full, it might have been a different story.

Fire Capt. Lee Devries said by the time he arrived — he had been out of town at the time the initial call came in — he was overwhelmed with the scope of the blaze. He remembers the support he and his fellow firefighters received from agencies including the Freeborn County Red Cross and Salvation Army.

Two hundred forty-seven firefighters from in and around Freeborn County fought the blaze.

Johnson said the Farmland Foods fire was by far the highest dollar loss he’s investigated since he’s been an investigator.

“This will probably go down in history as the big fire in the city of Albert Lea,” Johnson said.

He noted that certain parts of that building were more than 100 years old, and the building had been added onto, sometimes without the proper permits. It was difficult for firemen to know the building well because there was not an up-to-date map of the plant.

Fire Capt. Mark Roche said firefighters worked long hours before being able to take a break, but despite this, they worked well together. They had trained together previously.

He noted he went 18 hours before he was first able to leave the scene.

“It was a hole in the community,” Roche said. “So many years of seeing that plant there, and then it was gone. We’re still waiting for that day for that lot to become its next life.”

Jeanie Opdahl, director of the Freeborn County Chapter of the American Red Cross

Opdahl said she was on her way home from a family reunion on July 8, 2001, and had no sooner pulled into her garage when she received a phone call to come up to the plant. She drove from her home in Emmons to the site, and the Red Cross volunteers set up in the northeast corner of the parking lot. 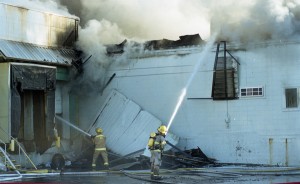 Opdahl said she remembers it being “unbeastly hot,” and she and her volunteers, along with Salvation Army volunteers, served water and Gatorade to firefighters to help them stay hydrated.

She noted she was impressed with the many businesses in town who donated ice and the other drinks to hand out.

“It was a severe blow, even if you weren’t actively working there,” Opdahl said of the fire. “It was gone. It totally changed the economy of the city, and also the morale.

Haukoos, who was in his second year as mayor, was out visiting his brother in Walters the day of the fire. He said he was on his way back to Albert Lea and was about five miles west of the city when he saw a huge smoke cloud over the city.

When he arrived at the plant, the building was engrossed in fire.

He was able to get closer to the fire, talk to some of the firemen and get an update on the situation. He was impressed with how well the firefighters worked together.

“I was watching, and it was like they had been trained to fight this fire,” said Haukoos, a former firefighter himself. “Everyone did a great job in assisting Albert Lea.”

Afterwards, he and other city leaders got together to discuss what could be done to save the plant and the jobs for so many residents.

“They just couldn’t believe we were going to lose one of our largest employers at the time,” he said. “It meant a lot to a lot of people in this community.”

Even years after the incident, Haukoos said he has had difficulty driving by the site of the former plant.

“It was such a blow to the city of Albert Lea, all those jobs that were lost,” Haukoos added.

Lee, who had worked on the loading dock that same day, said he had left the plant around 3:30 p.m., before receiving a call from a co-worker on the dock telling him to come back to the plant because it was on fire.

“He said, ‘You’re not going to believe this, but the packinghouse is on fire,’” Lee said.

By the time he got to HealthReach — he lives off of South Shore Drive — he could see black smoke.

Having worked at the plant for almost 25 years, he said he was in shock.

“You work somewhere for 25 years, you look and you’re watching your job and where you work go up in smoke,” Lee said.

At the time, he had three children at home and his wife was attending Riverland College.

“I can still picture where the stockyards were, where the packing house was, where the shop was in the back,” he said.

He ultimately got a part-time job being a peer support specialist, helping Farmland employees get jobs and attend Riverland. He also worked with the unemployment extension for Farmland.

It was this event that motivated him to get involved with politics.

Around the same time Wojszynski found out the plant had burned, his wife, Susie, told him she was experiencing signs of colon cancer.

After tests with the doctor, she was quickly scheduled for surgery.

“First you get the shock of the plant burning down, then I got another shock of my wife having cancer,” he said.

About ready to lose their insurance, he and his wife signed up for COBRA coverage, which he said was costly, especially without a source of income.

He signed up for unemployment around the same time his wife had her surgery.

He was grateful his wife was able to be treated locally and said he was impressed with the local cancer center staff.

At age 54 at the time, he was worried a new company would never hire him; his skills only pertained to the meat industry.

Now, as he thinks back 10 years to that difficult time in his life, he said he still gets saddened to drive by the site where the plant used to be.

“I wonder what are they ever going to do with that land,” Wojszynski said. “It’s sad because the tombstone — so to speak — is gone. There’s no physical thing to remind you of the past.”

Farmland Foods fire by the numbers

2.3 million Gallons of city water used to extinguish the blaze.

58 Pieces of apparatus at the scene.

23 Fire departments that responded to the blaze.

600,000 Gallons of water from Farmland’s own well used to fight the fire.