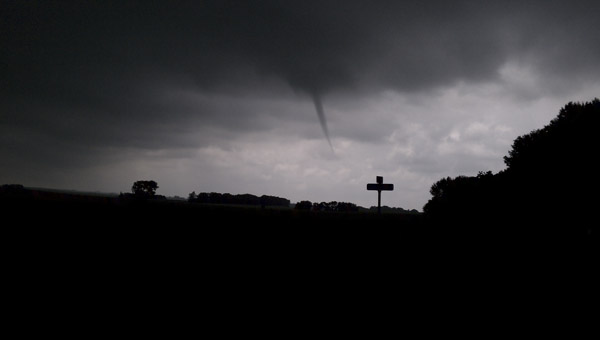 This picture of a funnel cloud was taken three miles west of Conger this afternoon after 2 p.m. -- Rich Mirelli/Albert Lea Tribune

At 2:50 p.m., funnel clouds were reported north of the intersection of state Highway 13 and Interstate 90. 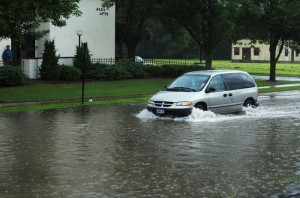 Several reports of funnel clouds sighted between Conger and Alden were received by authorities around 2:10 p.m. The funnel clouds were coming down and lifting back up. Conger Fire Department was warned about the funnel clouds, and sirens were sounding in that community.

Mike Springer, of Blue Earth, was in the area working on telephone lines for his company, Bevcomm.

“I just stumbled upon it,” Springer said.

He said he was about four miles west of Conger when he saw funnel clouds that were long, skinny and white. He said he didn’t know for sure if they had touched the ground. 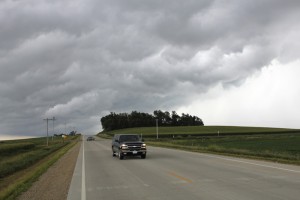 An off-duty Freeborn County Sheriff’s Office deputy reported a tornado had touched down, though no specifics as to the area of touchdown were discovered.

Around 2:20 p.m. it was reported that there were no longer clouds touching down.
Sirens sounded in Albert Lea shortly after.

Many people in Alden witnessed the funnel clouds extend down from the storm front. They gathered outside to watch the threatening clouds.

The National Weather Service had forecast no severe weather for Thursday. There was a chance for thunderstorms in the late afternoon and early evening. 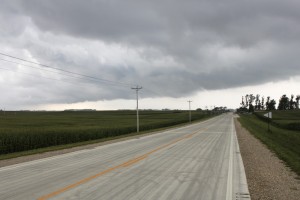 A squall line provides high contrast Monday afternoon above the horizon on Freeborn County Road 46 near the Armstrong corner. A funnel cloud had been spotted a few minutes earlier near Conger. -- Tim Engstrom/Albert Lea Tribune

It did issue a tornado warning for Freeborn County once the funnel cloud was spotted. It was lifted around 3 p.m.

The storm that followed brought sudden, heavy rain in some places of Freeborn County, while other areas remained sunny.

Main Street in Albert Lea was closed Thursday afternoon near Morin Park because of flooding around 3 p.m. A car, driven by Todd Drosland, had stalled in the deep water and was being towed by Allen’s Tow-N-Travel.

“I didn’t even see the water because it was raining so hard,” Drosland said. “The water went up over the top of my car.”

People were gathered on Freeborn County 46 near the Armstrong corner to watch the clouds. Many members of law enforcement — Albert Lea and Alden police, state troopers and sheriff’s deputies — were watching the skies, too, as the storm moved through Freeborn County.

Boys found the ponds of deep water that formed at Morin Park. Dylan Espinosa and Patrick Dooley were among the kids playing in standing water Thursday afternoon after heavy rains came through the area.

The storm continued to produce heavy rain as it traveled northeast Thursday. The National Weather Service issued a flash flood warning for Mower County and other counties in southeast Minnesota.