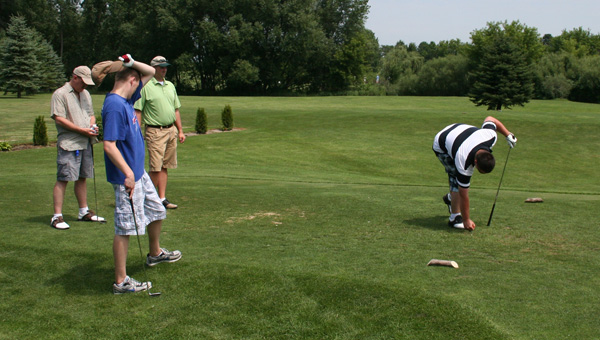 Participants in the Albert Lea-Freeborn County Chamber of Commerce Golf Outing sure had to drink plenty of water to beat the heat.

No matter where you looked Monday at Green Lea Golf Course, when people didn’t have a golf club in their hand, they had a bottle with water in it or a sports drink.

“It was hot,” said golfer Nick Beyer. “We stayed hydrated and found shade whenever we could. We had to drink plenty of fluids.”

Still, most teams played on like normal, and fun was had.

“The weather today did impact the golf,” said Randy Kehr, the chamber director. “I think it slowed things down, but most everyone was playing it safe and drinking plenty of water. We had Gatorade on the course, and everyone did quite well all things considered. It was very hot out there.”

An excessive heat warning issued by the National Weather Service remains in effect for Freeborn County and much of the Upper Midwest through Wednesday evening.

The temperature on Monday in Albert Lea was 90 or 91 during most of the afternoon, reaching 93 just before 5 o’clock. With the humidity being so high — the dew point of 82.4 degrees — it means the heat index at that time was an unbelievable 117 degrees.

A trait of the heat wave that arrived over the weekend has been a lack of a breeze. That could change Wednesday, with a southwest winds providing some relief.