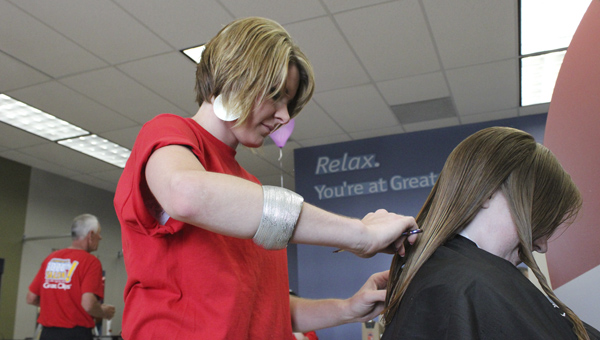 Raelynn Depyper makes the first cuts on Rachel Amundson’s hair at the 3,000th Great Clips salon, which is in Albert Lea. The salon gave away its first 100 haircuts for free. -- Garrett Wampler/Albert Lea Tribune

Within 15 minutes of being open on Friday, the new Great Clips store on Blake Avenue had filled all of their salon chairs, the seats in the waiting area were filled and there was a line to the door.

It was a special day for owners Roger and Marylu Ledebuhr. The Albert Lea salon marks the 3,000th Great Clips store in the nation, and for the Ledebuhrs it is the 18th store that they currently own.

“I think it is wonderful, and exciting. I never thought in a million years we would have the 3,000th salon,” Marylu Ledebuhr said. “It is extra special to be able to do it with the family. They really enjoy being involved in the business.” 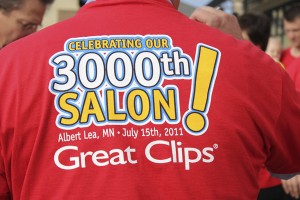 The Albert Lea salon marks the 3,000th Great Clips store in the nation, and for Roger and Marylu Ledebuhr it’s the 18th store that they currently own. -- Garrett Wampler/Albert Lea Tribune

The first customer of the day was Albert Lea native Rachel Amundson, 25. She waited outside for the doors to open so she could get her hair trimmed and layered.

Amundson said she enjoyed her haircut, and she would return to the store for her future hair care. She was a regular customer of Great Clips before they left Albert Lea.

The former Great Clips was in Northbridge Mall, and became The Image Hair Salon in January 2010.

“I’m glad that Great Clips is back in town,” Amundson said.

She has been with Great Clips since she started cutting hair out of the Mankato School of Cosmetology and is now the manager of the Riverfront Drive location in Mankato, and the assistant general manager of this area. Depyper was helping out for the grand opening.

Robert Adams, 57, of Albert Lea, was another one of the salon’s first customers. He said he liked his cut, and he will be back. 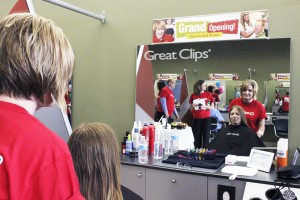 Roger Ledebuhr remembers the vast differences in the chain of stores from 28 years ago.

“It’s amazing. When we first opened, there weren’t any computers. All the work was done by hand,” he said. “It’s now all computerized. We have online check-in now. We have a database of our customers so when they come back for another visit we know what we did before and what they want done with their hair.”

Along with the technological advances in the industry, he can also recall the decoration changes in his stores. He said originally the dividers for the stations were actual canvas from sailboat sails. They collected too much hair, and now they are just acrylic.

The floors that line the hair salon in 1983 were tiled and hard to clean up the hair. Now, they are circa-2011 wood-grained floors.

“We were probably the first low-cost hair cutters in 1983; we were setting a new trend,” Ledebuhr said. He said they only charged $6 for haircuts at the time, they will charge $12 now.

“I think it will bring a couple of things to Albert Lea. One is a very professional, well-trained staff that is tuned in to the customers, trying to deliver what the customer wants,” Ledebuhr said. “The second thing is the ease of getting a haircut. You don’t need to make an appointment, and they’re open seven days a week. It allows the customer to get a haircut when they want to.”

Marylou Barton, the Ledebuhrs’ original partner in 1983 and husband to Ray Barton, one of the original Great Clips owners, was on hand for the occasion and couldn’t believe the chain had reached 3,000 stores. 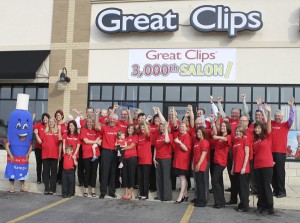 Owners, employees and other members involved with the 3,000th Great Clips salon celebrated outside the building before they officially opened for business on Friday. -- Garrett Wampler/Albert Lea Tribune

“I think the first time he (Ray) said it was at our first conference in 1988,” Barton said. “He said how he was looking forward to 3,000 salons. He kept talking about it every year, and I told him he was starting to embarrass me.”

The other Great Clips founder was David Rubenzer.

The store has hired six people from the Albert Lea community, and they hope to have a total of 10 to 14 employees.

Barton said she told him she didn’t believe him and told him to rethink his vision. At the time, the Great Clips chain only operated 150 salons.

Great Clips gave away their first 100 haircuts for free on Friday. They will only charge $2.99 for a haircut until July 22. After a customer has had eight haircuts, the ninth one is free.

Children 10 and under and seniors 65 and over can get their haircut for $10. Great Clips can also style hair, trim your bangs, neck or beard, do a perm and they also offer a conditioning treatment.

The Ledebuhrs operate under the entity Snip Inc. For them Snip Inc. is a family affair, which Roger Ledebuhr hopes will include their grandkids one day. Their daughter Krista and her husband Eric Bull work as the vice presidents of the corporation. Son Josh and daughter-in-law Stacey Ledebuhrs own and operate three other Great Clips locations in Owatonna, Red Wing and one in Wisconsin.