Hartwick Leroy Larson, 101, of Bricelyn, died Sunday, July 24, 2011, at United Hospital in Blue Earth. Funeral services will be held at 2 p.m. Thursday at North Blue Earth Lutheran Church in Brush Creek Township., Faribault County. Visitation will be from 4 to 8 p.m. Wednesday at Bruss-Heitner Funeral Home in Bricelyn. Visitation will also be one hour prior to the service at the church on Thursday. The Rev. Luther Peterson and the Rev. Karl Rydholm will officiate and burial will take place in North Blue Earth Lutheran Cemetery, Brush Creek., Faribault County. Bruss-Heitner Funeral Home in Bricelyn is assisting the family with arrangements. Memorials are preferred to St. Luke’s Lutheran Home in Blue Earth or to Prairie River Camp in Bricelyn. 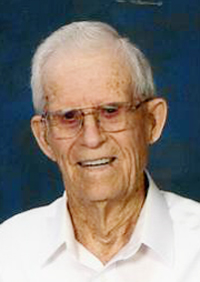 Hartwick was born Feb. 19, 1910, in Bricelyn, the son of Arndt and Gunhild “Julia” (Bottelson) Larson. On Feb. 28, 1931, he was united in marriage to Anna Tellefson at the South Blue Earth Parsonage in Seely Township, Faribault County.

Hartwick was baptized on March 28, 1910, and confirmed March 9, 1924, both at the South Blue Earth Lutheran Church. He was a member of the Bricelyn School Board. He served on the North Blue Earth Church Council and was a member of the Farm Bureau for many years. He was always very active with his church and made nightly prayer a very important part of his day. He loved to play tile rummy and was very difficult to beat at this game. He was a very faithful and devoted husband until Anna’s passing in 2002, just one month short of their 72nd anniversary. He farmed all his life and said (and modeled) the secret to longevity is moderation and a strong work ethic. In his younger days, he enjoyed roller-skating. During retirement he wintered in Texas for 28 years, and enjoyed dancing. He played the accordion by ear.

He was preceded in death by his wife, Anna, in 2002; his parents; an infant child; one great-grandson, Brandon; eight brothers and sisters: Emma, Clara, Arvilla, Minnie, Maynard, Orville, Lydia, and Alma.