Funeral services for Herbert Henry Drescher, 84, of Albert Lea, will be held at 10:30 a.m. Wednesday at United Methodist Church. The Rev. Tom Biatek will officiate. Interment will be at the Hillcrest Cemetery with military honors accorded by Freeborn County area veteran’s organizations. Visitation will be one hour prior to the service at the church. To sign the guest book, go to www.bayviewfuneral.com. 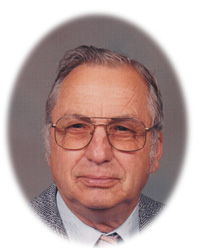 Herbert Henry Drescher was born on May 6, 1927, to Henry and Amanda (Katzung) Drescher in Alden. He went to country school in Freeborn County and then served in the United States Army for four years. Herb was united in marriage to Velma Cordes on April 20, 1968, at Salem Evangelical United Brethren Church in Dumont, Iowa. Herb is a member of United Methodist Church and also the American Legion Post 56 and the Eagles Club in Albert Lea. Herb was a truck driver around Albert Lea and different states. Herb loved the outdoors, fishing, camping, bluegrass music and birds, which he always took time to feed. He enjoyed caring for his yard and flowers which he took great pride in, playing cards, watching TV and going out to eat. Herb loved spending time visiting with his grandchildren.

Herb was preceded in death by his parents; brothers: Norman, Ellsworth, Orville and Maynard; one brother and sister in infancy; sisters-in-law: Marge Drescher and Verna Drescher; and brother-in-law, Clarence Cordes.