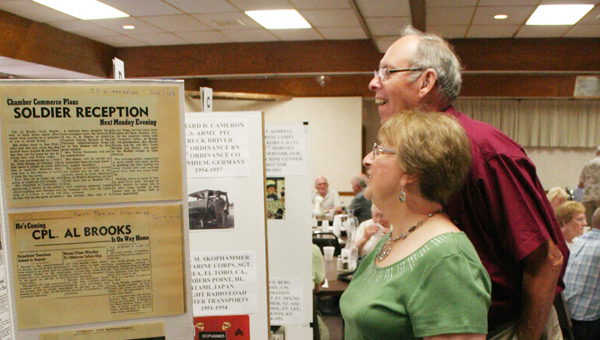 More and more people have been contributing historical items like photos, news articles and maps from the Korean War era to area veterans’ organizations, which is helping keep that history of local veterans alive.

The Veterans of Foreign Wars Post No. 447 and Leo Carey American Legion Post 56 have teamed up to collect these artifacts and had them on display July 17 and today at the American Legion. Each organization hosted one Sunday, and each held a breakfast so people could visit with one another and browse through the displays set up.

“There was a very good turnout,” Bryan Tlamka, commander of the VFW, said of last Sunday’s event. 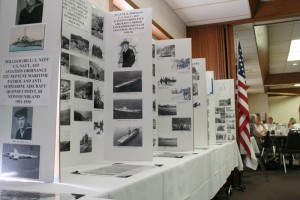 Displays were set up with photos and information about veterans from the Korean War era of 1950 to 1960. The American Legion and VFW host a similar event for Vietnam War era veterans in March.

The American Legion is hosting today’s breakfast. Tlamka said he thought it was great to see the support of area residents who came to the event. Dave Olson, a member of the VFW and American Legion, has been helping collect information and photos for the display. The Disabled American Veterans Chapter No. 16 also helped with displays.

“It’s just so important because there’s so many of the veterans who are passing away because of age,” Olson said.

“We’re just hoping to go out there and find out who in Freeborn County was in the military service, not necessarily overseas, but serving anywhere during those times,” Olson said.

Olson is hoping more and more veterans or relatives of veterans can contribute information to the exhibit. This is the third year of the Korean War era exhibit, and more people keep volunteering photos and information. 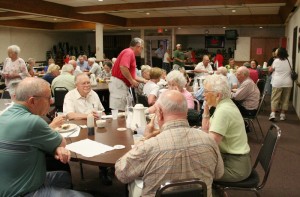 People visit while eating breakfast on July 17 at the American Legion. The VFW hosted last Sunday, while the Legion is hosting today’s breakfast. Both organizations worked together to collect information and historical facts about Korean War era veterans.

“We were very, very surprised there were so many veterans who were willing and anxious to display pictures and talk about their military experience with the public,” Olson said.

Olson also said the organizations hope to have similar events honoring veterans serving in more recent wars because it’s good for the public to be able to hear about what veterans experienced.

“It’s good to actually see the conditions these men and women had to deal with who were in the service,” Olson said. “It was really humbling to spend some time talking about their military service and what they saw as young people in Korea and what they had to put up with in those harsh winters and that environment.”

He heard many comments from attendees that they knew a lot of the people featured in the displays but that it was interesting to see detailed information about where and when they served.

“It’s great to see people come out and get a good breakfast and look at the pictures and see some of the experiences the guys had over there,” Tlamka said.