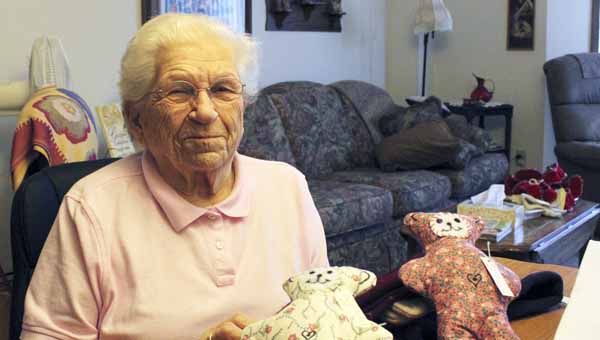 Ardell Anderson’s age hasn’t denied her the ability to do what she loves the most, helping others. The most recent group to benefit from Anderson’s goodwill is the Oglala Lakota Integrated Tribal Child and Family Services Agency in Pine Ridge, S.D.

The 86-year-old woman has recently been spending her time sewing hats, mittens, dolls and other items to donate to the American Indian group. 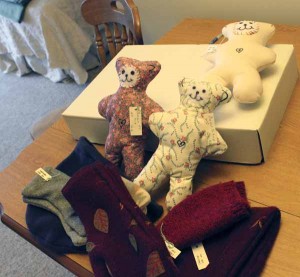 Bears, dolls, hats and mittens are just a sample of the items Ardell Anderson made for the LOWO Child and Family Services Agency in South Dakota. -- Garrett Wampler/Albert Lea Tribune

“Age does not make one bit of difference in what you can do,” Anderson said. “I walk around with a walker and I can’t do somethings, but that doesn’t stop me from doing something.”

She learned about the possibility of donating from a craft book, which she ordered through Lutheran Woman Today. Originally, Anderson was in search of something to do with her time when she came across the ways to help others.

After a little research on all of the opportunities, she settled on the South Dakota tribe because they were the only group not seeking monetary donations, but rather items of need.

“Why send things to other countries when less than 200 miles from us there are such people in need,” Anderson said. “The kids over there are so abused and neglected.”

Anderson feels that by helping someone it gives her the chance to do something creative and have a purpose in life.

“I’ve just always done something, I don’t like to sit around and do nothing,” Anderson said. “My sewing machine has been a good friend of mine.”

Materials for the items have been a collection of donated materials of Anderson’s friends. She has been selling some of the items to defray the cost postage to mail all of the items to the reservation.

On July 4 she sent a full, 15-inch square box of garments to South Dakota.

She enjoys lending a helping hand, which has been evident throughout most of her life even before helping the Oglala Lakota.

Before she retired, Anderson also worked with the mentally handicapped. She currently teaches a writing group that meets every Monday morning. Anderson also tutors others English.

She often doesn’t hear back from those who she has helped in the past, but when she does hear from them, she says “it feels good.”

“I was at a gathering and a young gal came up and gave me a big hug, and she said ‘do you remember me?’ and I didn’t at first,” Anderson said. “I had tutored her when she was in high school. It really made me feel good.”

There is one thing that she feels is important to learn in life. It is a lesson she has lived by and has taught her children.

If you would like to donate any materials such as old sweaters or fleece you can contact Anderson at 507-373-2604.