“We never know how far reaching something we may think, say, or do today will affect the lives of millions tomorrow.” — Dr. BJ Palmer, the developer of Chiropractic and first president of Palmer College of Chiropractic.

In early April of this year I received notice of an honor. An original research paper I had written had been selected as a poster presentation at the 2011 European Chiropractic Union Convention. The paper is titled “Resolution of Pediatric Conjunctivitis using the Chiropractic Adjustment: A Case Report.” The conference was June 2-4, 2011, in Zurich, Switzerland, and attended by nearly 500 chiropractors not only from Europe but from around the world.

A case report contains an introduction of the subject matter, the history of the patient, the treatment or intervention, the results and a discussion section. This paper details the treatment of a 3-month-old infant who initially was presented for colicky symptoms. He had also suffered from conjunctivitis since shortly after his birth. He had been treated without effect by several different doctors using different antibiotic courses. Conjunctivitis is an infection of the eye that sometimes is referred to as pink eye and is the most common childhood eye disease. Bacterial conjunctivitis involves eye irritation, inflamed tissues and a discharge. Often times the eyes are matted shut due to this discharge. The patient was treated with a chiropractic adjustment that is used specifically for infants. At the time of his second visit, his grandmother stated the chronic conjunctivitis had completely resolved after the first treatment. The conjunctivitis not only resolved after the initial visit but in subsequent interviews with the family they reported the conjunctivitis has not recurred. 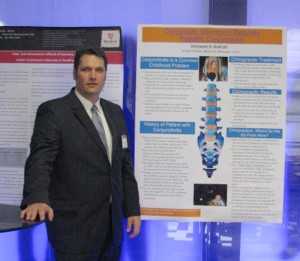 Christopher Shoff poses for a photo at the European Chiropractic Union Convention in June. -- Submitted photo

The poster presentation at the 2011 European Chiropractic Union was an honor and a wonderful experience. The posters were displayed throughout the conference outside the rooms used for classes. The poster presentation lasted for over an hour with the conference attendees all meandering through, reading through the posters, asking questions and offering insights. The conference also provided an opportunity to hear how European chiropractors practice, the differences in their practice and the similar issues involved in chiropractic throughout the world.

It is my goal to continue to further promote the importance of this case report and also stimulate further research into this matter. It is also a goal that this case study will be beneficial to other chiropractors in the treatment of pediatric patients and encourage others to document case reports from their chiropractic practices. My hope is that this research article will create a ripple effect in how this common pediatric disease is treated in the future.