Funeral services for Lucas G. (Pete) Luna Sr., 72, of Hollandale, will be held at 10:30 a.m. Friday at The Church of St. Theodore. The Rev. Tim Reker and Deacon Mike Ellis will officiate. Interment will be at the St. Mary’s Catholic Cemetery, rural Geneva, with military honors accorded by Freeborn County area veteran’s organizations. Visitation will be from 4 to 7 p.m. Thursday at Bayview/Freeborn Funeral Home with a prayer service in English at 6:30 p.m. Visitation continues one hour prior to the service at the church. To sign the guest book, go to www.bayviewfuneral.com. 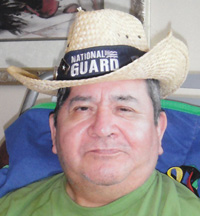 Lucas died suddenly due to complications with pancreatitis Monday, July 4, 2011, at District One Hospital in Faribault.

Lucas G. Luna was born Oct. 18, 1938, to Felix and Manuela (Gonzales) Luna in Minnesota Lake. On Feb. 9, 1957, he was united in marriage to Gloria Gomez at St. Mary’s Catholic Church, rural Geneva. Lucas was a lifetime resident of the Hollandale area. Prior to serving two years in the United States Army, he helped his father on the farm. Upon completing his two years of active duty, he continued his military background by joining the National Guard Reserves. While serving 29 years, he received many awards for his time as a leader and dedication to the Reserves. He worked at Wilson Foods for 26 years and he helped local farmers with fall harvesting. While in the Reserves, he participated in the color guard in the 135th Infantry Division, Albert Lea and later transferring to the 47th S&T BN, Austin. He also was the founder of the Winter Operations, as a ski instructor, where he trained men how to ski at Fort Ripley. He was known to his buddies as “Taco.” Lucas retired from the National Guard Reserves in 1987. Lucas enjoyed fishing, being outdoors, spending time with his grandchildren and family members. He loved visiting with people; he was a social talker and was very good at it. Lucas was a member of the Moose Club and American Legion. At age 53, Lucas was in and out of nursing homes due to a farm accident. During his stays there, he enjoyed his time with residents and attended Mass when he could. He was a devoted Catholic.

Although you left us without saying goodbye, you will be missed deeply and will forever be in our thoughts and prayers all the days of our lives.