Main Street closed because of flooding 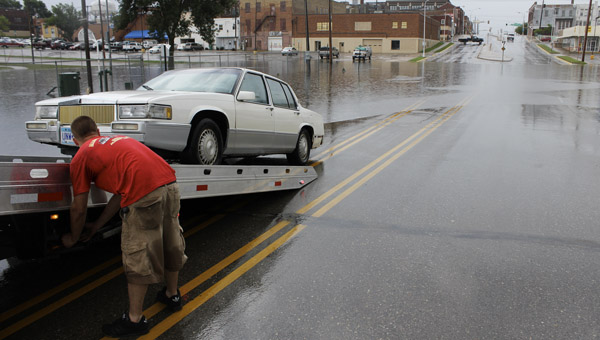 An Allen's Tow-N-Travel driver operates a winch that pulls Todd Drosland's Cadillac. The car had been stuck in the flood on East Main Street near Morin Park around 3:20 p.m. Monday. -- Tim Engstrom/Albert Lea Tribune

East Main Street in Albert Lea near Morin Park has reopened. It had been closed because of deep standing water. Other side streets near by were also flooded and cars are not advised to go through the water.

West Main Street remains closed near Godfather’s Pizza and Hanson Tire. The road was closed near the end of he workday but is expected to reopen this evening. The area drains more slowly than near Morin Park.

The National Weather Service estimates that between 1/2 inch and 2 inches of water fell starting at 2 p.m.