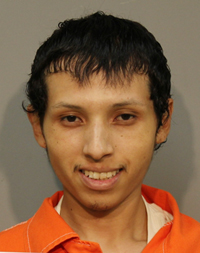 The man, Angel Delossantos, pleaded not guilty to one count of second-degree criminal sexual conduct for allegedly abusing the girl — who is now 5 years old — sometime between July 2008 through March 25 of this year.

The contact was reported in April by the child’s new foster mother, who believed the girl had been sexually abused. The girl has since gone through several interview and therapy sessions.

Second-degree criminal sexual conduct carries a maximum penalty of 25 years in prison and a $35,000 fine.