Funeral services for Marion Grasdalen, 101, of Albert Lea, will be held at 2 p.m. Wednesday at East Freeborn Lutheran Church. The Rev. Matt Griggs will officiate. Interment will be at the Central Freeborn Cemetery. Visitation will be one hour prior to the service at the church. To sign the guest book, go to www.bayviewfuneral.com. 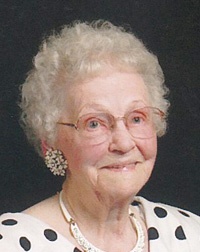 Marion Ardis Grasdalen was born Feb. 6, 1910, in Superior, Wis., the daughter of Walter and Pearl (Cooper) Hall. On June 11, 1932, she was baptized at the United Methodist Church in Albert Lea. In 1927 Marion graduated from Albert Lea High School. On June 11, 1932, she was united in marriage to Raymond Grasdalen. In 1939 the couple purchased a farm in the Lerdal area where they farmed until 1974 when they moved to Albert Lea. Marion was a member of East Freeborn Lutheran Church where she had been active in ladies aid, altar guild and mission circle. She had been active in country school District 88 and she and Ray were active in the Farmer’s Union for 19 years in both Freeborn County and the state of Minnesota. She was especially active in youth works.

Survivors include many nieces and nephews.