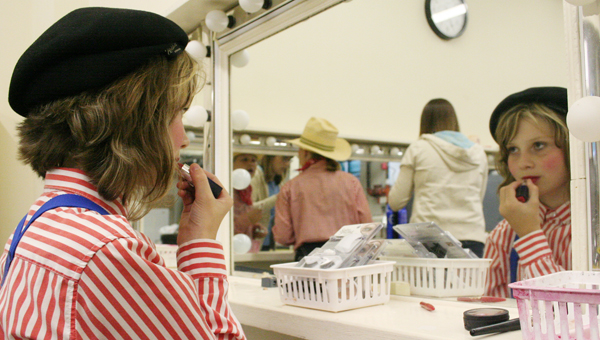 Not only is Albert Lea Community Theatre’s production of the musical “Gypsy” a family-friendly show, it stars an entire family.

The Pederson family, made up of parents Neal and Shelley, son Marshall, daughter Carma, and two dogs Lola and Porky, will all perform in the show that starts tonight at the Marion Ross Performing Arts Center. 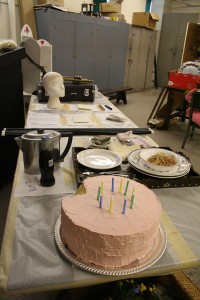 Props stand at the ready labeled for which act they’ll be used for in the basement of the Marion Ross Performing Arts Center. -- Kelli Lageson/Albert Lea Tribune

“We all like to go to plays and to actually be in one is interesting,” Neal said.

Shelley said she has enjoyed watching the play come together and watching the children in the show act. Director Steve Kinney said he thinks it’s one of the best musicals ever written. The show is based on a true story set in the 1920s.

“It’s got so many wonderful things,” Kinney said.

He said his favorite song in the show keeps changing, but one song people will recognize is “Everything’s Coming Up Roses.” The story follows Rose, a stereotypical stage mother, and her two daughters at various ages. Angela Wagner Donlon plays Rose and said she’s enjoyed playing a character who has many emotions.

Wagner Donlon also enjoys acting with all ages from elementary-age kids to seniors. She’s also performed with Owatonna’s local theater and said it was fun to meet new actors and see how another theater runs.

“I’m so grateful to work with Steve Kinney — he’s taught me so much,” Wagner Donlon said. 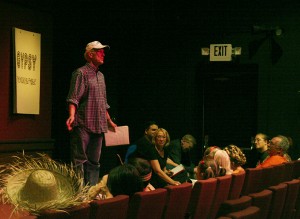 Kinney said it’s always a treat to work with local actors, and he continues to be surprised by the talent of people in the community. He’s directed more than 100 productions, but this will be his first time directing “Gypsy.”