Funeral services for Melvin O. Bratvold, 90, of Albert Lea will be held at 2 p.m. Monday at Zion Lutheran Church. The Rev. Joel Vano will officiate. Interment will be at Hillcrest Cemetery. Visitation will be one hour prior to the service at the church. To sign the guest book, go to www.bayviewfuneral.com. 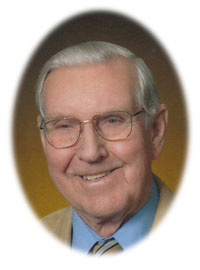 Melvin O. Bratvold was born on March 24, 1921, to Andrew and Karen (Jorstad) Bratvold in Kenyon. He grew up in southern Minnesota on the family farm where he liked to go horseback riding and most of all fishing year round. Melvin graduated from Kenyon High School and continued his education at the Raye Vogue Commercial Art School in Chicago, Ill. On June 12, 1946, he was united in marriage to Helen Bremer in Faribault. Melvin was self employed in visual merchandising. He was an active member of Zion Lutheran Church and Lion’s International. He enjoyed working on city and county promotional events and school sports programs. Melvin was an avid Minnesota Gophers sports fan and enjoyed watching all major league and local sporting events.

Melvin was preceded in death by his parents; wife, Helen; one brother and one sister.