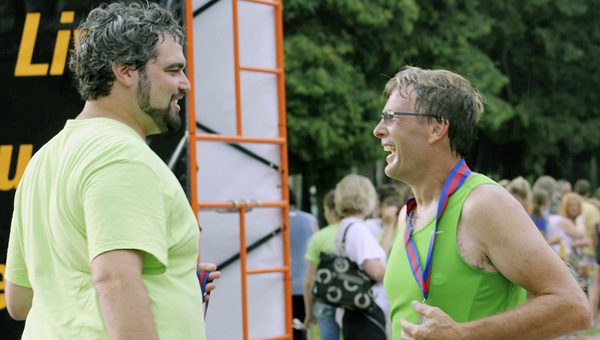 HAYWARD — Ben Merchant took the lead of the fourth annual April Sorensen Memorial Half Marathon around mile marker nine and didn’t look back.

The Minneapolis native crossed the finish line of the 13.1 mile course on Main Street in Hayward, earning him $500 and his third consecutive victory at the event in a time of one hour, 13 minutes and 11 seconds.

Merchant began to make his push around mile marker seven to catch leader Tim Hardy. Hardy, 36, finished second in 1:14:37, just one minute and 26 seconds behind Merchant.

Hardy led the half marathon through the opening stages of the race. He held a slim 22-second lead over Merchant, and eventual third place finisher Ethan Marquardt, at the six mile mark.

The North Mankato resident wasn’t accustomed to being in the lead from the beginning of the race. He said usually Merchant goes out hard and “hammers it.”

On this day, the humidity held Merchant back at the beginning of the race.

“I knew it was going to be hot and humid, luckily the sun was not out, the humidity makes a huge difference,” Merchant said. “I was feeling kind of sluggish this morning so I took it out kind of slow and I just settled into the pace.”

Merchant said the course is tough and is hilly which makes it pretty slow. He said around the half way point is when the hills start to become an issue.

The first- and second-place male finishers are both in training for full marathons. Merchant is planning on running in the Twin Cities Marathon, while Hardy is preparing for the Chicago Marathon.

Ali Wolpern, 19, a sophomore at Division II Colorado State University-Pueblo, won the women’s race with a time of 1:28:43. She runs the 6k in cross country and the steeple chase in track at Colorado State.

Wolpern just returned from high altitude training in Boulder, Colo., and said running at sea-level is a nice change.

“I was getting nervous before and thinking that some of these girls look really, really good,” Wolpern said. “My dad said ‘Who knows if they are? You’re good, too.’”

Her goal was to complete the course in under one hour and 40 minutes. Wolpern, who finished eighth overall, said, “I didn’t even know I was capable of it.”

She lead the women’s race from the start, running the first mile in 6:45. Wolpern said she saw a male pack going her speed and tried to stay with them.

Alicia Traut finished 10th overall and second among the women with a time of 1:35:34 with Rebecca Skaar finishing third in 1:40:44.

“I have her all the way through the finish, from the start to the finish I have April right with me,” Larson said, fighting back tears. “It’s emotional at times.”

Larson said Sorensen enjoyed running marathons and often they participated in the runs together.

This was the fourth year for the event, the first year for the start time to be at 7:30 a.m., and it is run in memory of Albert Lea High School graduate April Sorensen, who was found dead in her Rochester home in 2007. Her case remains active but unsolved.

The route of the course began in Albert Lea on the East Main Street service road. It went through town and around Albert Lea Lake. The course turned north on Highway 26 and went straight into Hayward for the finish.

More than 100 volunteers were placed at different points in the race including at the start, finish and at six water stations designated on the course. The local roads were closed of and were being controlled for safety by Southern Minnesota REACT.

Money raised from the event will go toward two $500 scholarships to the Albert Lea, Alden-Conger and Glenville-Emmons school districts, along with helping to fund the Blazing Star Trail.

“It means a lot, it really brings April’s memory back into the forefront,” Sorenson’s husband Josh Sorensen said. “Its good to get everyone back together and unite … to have something to look forward to.”