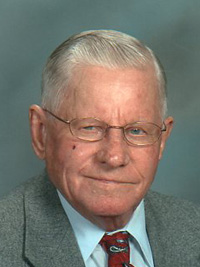 He was born to Myrtle and Edward Swenke on Aug. 19, 1924. His mother later married Ernest John Pape, Milo’s loving stepfather. Milo was raised in Princeton. For his entire life, he worked in the dairy industry, as a champion butter maker and then as a plant manager. Milo settled in Goodhue where he raised his family.

He was a member of Holy Family Catholic Church, a member of the Knights of Columbus 4th Degree and a 64-year member of the American Legion. He was named Outstanding Citizen of the Year for Goodhue County in 1965. Milo loved the Minnesota Twins, golfing, fishing, playing cards and a good conversation with anyone that would listen.

Visitation will be from 4 to 6 p.m. Sunday at Holy Family Catholic Church, 1904 N. Mantorville Ave., Kasson, with a prayer service at 6 p.m. Friends may also call one hour prior to the service on Monday. The funeral service will be 10 a.m. Monday at Holy Family Catholic Church with Friar Paul Surprenant officiating. Burial will be at St. Margaret’s Cemetery in Mantorville.

In lieu of flowers, the family prefers memorials to Holy Family Catholic Church or Seasons Hospice.